EU may punish Britain for disagreement over trade 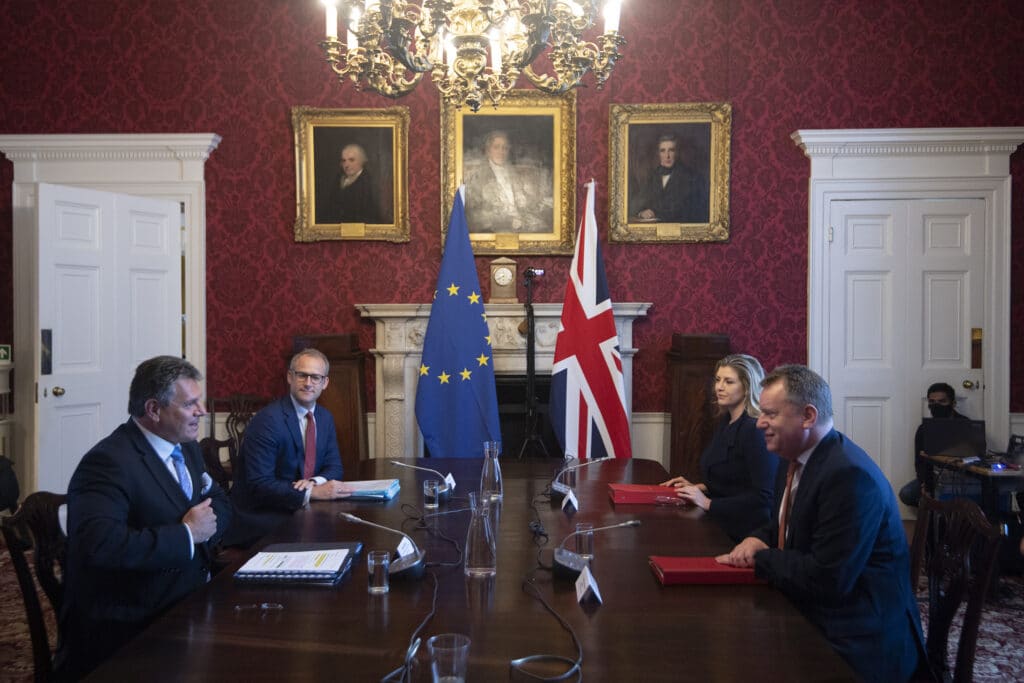 The European Union says Britain is not living up to its obligations under the Brexit agreement, which may result in retaliatory tariffs or other sanctions against the country. There are rising tensions over provisions of the Brexit deal that essentially created a regulatory border between Northern Ireland and the rest of the United Kingdom. The Associated Press has the story:

LONDON (AP) — A top European Union official said Wednesday that Britain could face retaliatory tariffs or other sanctions after talks failed to resolve an increasingly heated dispute over implementation of their post-Brexit trade deal in Northern Ireland.

Maros Sefcovic, the EU’s chief negotiator, said the relationship between the two sides had reached a “crossroads” amid the U.K.’s continued failure to live up to its obligations under the Brexit agreement.

“Trust, which should be at the heart of every partnership, needs to be restored,” Sefcovic told reporters after the talks. “That is the EU approach and the EU preference. If the U.K. were to take further unilateral action over the coming weeks, the EU will not be shy in reacting swiftly, firmly and resolutely to ensure that the U.K. abides by its international law obligations.”

Sefcovic met with his British counterpart, David Frost, amid rising tensions over provisions of the Brexit deal that essentially created a regulatory border between Northern Ireland and the rest of the United Kingdom. That angered many pro-British residents of the territory who reject anything that threatens their status as part of the U.K.

The so-called Northern Ireland protocol was designed to protect the peace process there by ensuring that trade with the Republic of Ireland continued to flow freely after Britain left the EU. To do so, the protocol required Britain to conduct regulatory checks on some goods shipped to the region from other parts of the U.K.

Britain earlier this year unilaterally delayed some of those inspections, saying it needed more time to put systems in place to carry out the required checks. The EU threatened legal action over what it saw as a breach of Britain’s international obligations. Now the U.K. government is considering further delays and the EU is ramping up its response.

Frost called for “pragmatic solutions” to bridge the divide.

“What the EU is insisting on is we should operate the protocol in an extremely purist way,″ Frost said separately. “The reality is that it’s a very balanced document that’s designed to support the peace process and deal with the very sensitive politics in Northern Ireland.”

The EU has offered compromises

Sefcovic said the bloc was ready to compromise. For example, he said, the EU has offered to amend the rules to ensure they don’t slow the delivery of medicines and to make it easier to send guide dogs and used cars to Northern Ireland.

The bloc has also offered a deal that would do away with most checks if Britain agreed to align its rules on animal and plant health with EU regulations. Such an arrangement, similar to the EU’s trade deal with Switzerland, could be implemented on a temporary basis to give Britain more time to come up with a permanent solution, Sefcovic said.

But he also said the EU was growing frustrated as Britain delays the implementation of rules it agreed to 18 months ago.

Behind the dispute is the unique situation of Northern Ireland, where more than 3,000 people were killed during three decades of violence between those who support unification with the Republic of Ireland and those who seek to maintain ties to the U.K.

The 1998 Good Friday Agreement, which brought peace to region, was underpinned by the fact that both the U.K. and Ireland were members of the EU. That made it possible for trade to flow freely between Ireland and Northern Ireland, stimulating economic growth and creating jobs on both sides of the border.

In an effort to keep the border open, the EU and the U.K. agreed that Northern Ireland would remain part of the European single market after Brexit. But that meant EU rules on issues such as food safety would still apply in Northern Ireland and there would have to be checks on some goods shipped into the region from England, Scotland and Wales.

The divorce deal, which took effect Jan. 1, included a number of grace periods that gave Britain time to put in place new systems for checking goods coming into Northern Ireland to ensure they complied with EU rules. Those grace periods are now ending.

Now, the two sides are sparring over the rules governing chilled meats, raising the specter of what British newspapers are calling a “sausage war.” British officials are considering extending the grace period covering chilled meets to prevent the EU from blocking shipments of products such as sausages and ground beef on July 1.

The issue has attracted the attention of U.S. President Joe Biden, who will meet with EU officials and British Prime Minister Boris Johnson this weekend, when leaders of the Group of Seven richest democracies meet in Cornwall.

Aware of the central role his country played in brokering the Good Friday Agreement, Biden has warned that the U.S. won’t sign a trade deal with Britain if Brexit undermines the peace deal.

Johnson said Wednesday that any solution to the dispute must protect the unity of the U.K.