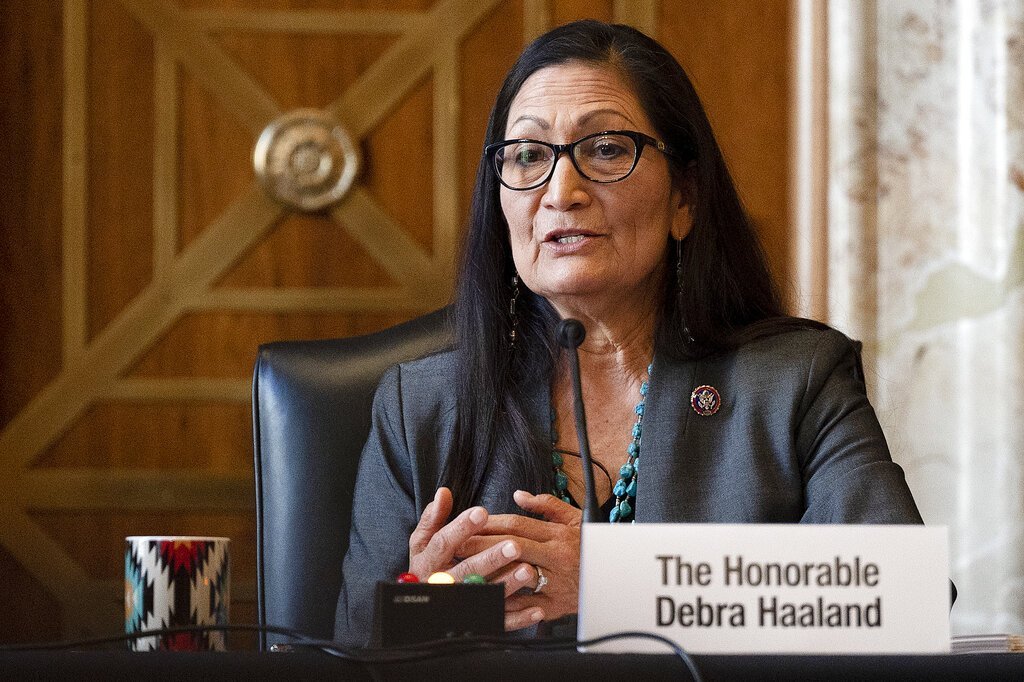 WASHINGTON (AP) — The Senate on Monday confirmed New Mexico Rep. Deb Haaland as interior secretary, making her the first Native American to lead a Cabinet department and the first to lead the federal agency that has wielded influence over the nation’s tribes for nearly two centuries.

Haaland was confirmed by a 51-40 vote, the narrowest margin yet for a Cabinet nomination by President Joe Biden. Four Republicans voted yes: Lisa Murkowski and Dan Sullivan of Alaska, Susan Collins of Maine and Lindsey Graham of South Carolina.

Democrats and tribal groups hailed Haaland’s confirmation as historic, saying her selection means that Indigenous people — who lived in North America before the United States was created — will for the first time see a Native American lead the powerful department where decisions on relations with the nearly 600 federally recognized tribes are made. Interior also oversees a host of other issues, including energy development on public lands and waters, national parks and endangered species.

“Native Americans for far too long have been neglected at the Cabinet level and in so many other places,” Schumer said.

Haaland is a member of the Laguna Pueblo and a 35th-generation resident of New Mexico. Her nomination has been closely watched by tribal communities across the country, with some virtual parties drawing hundreds of people to watch her two-day confirmation hearing last month.

Supporters projected a photo of Haaland, a two-term congresswoman who represents greater Albuquerque, on the side of the Interior building in downtown Washington with text that read “Our Ancestors’ Dreams Come True.”

Related: Navajo Nation Surpasses Cherokee with Most Enrolled in Tribe

Many Native Americans see Haaland, 60, as someone who will elevate their voices and protect the environment and tribes’ rights. Her selection break a two-century pattern of non-Native officials, mostly male, serving as the top federal official over American Indian affairs. The federal government often worked to dispossess tribes of their land and, until recently, to assimilate them into white culture.

“It is long past time that an American Indian serve as the secretary of the Interior,” said Fawn Sharp, president of the National Congress of American Indians, the nation’s oldest and largest tribal organization.

“The nation needs her leadership and vision to help lead our response to climate change, to steward our lands and cultural resources and to ensure that across the federal government, the United States lives up to its trust and treaty obligations to tribal nations and our citizens,” Sharp said.

Jonathan Nez, president of the Navajo Nation in Arizona, New Mexico and Utah, called Haaland’s confirmation “an unprecedented and monumental day for all first people of this country. Words cannot express how overjoyed and proud we are to see one of our own confirmed to serve in this high-level position.”

Haaland’s confirmation “sets us on a better path to righting the wrongs of the past with the federal government and inspires hope in our people, especially our young people,” Nez added.

Not everyone was celebrating. Some Republican senators have criticized Haaland’s views on oil drilling and other energy development as “radical” and extreme, citing her opposition to the Keystone XL oil pipeline and her support for the Green New Deal, a sweeping, if mostly aspirational, policy to address climate change and income inequality.

“American jobs are being sacrificed in the name of the Biden agenda, and Rep. Haaland couldn’t defend it,” Barrasso said last week, referring to decisions by Biden to reject the Keystone XL pipeline and impose a moratorium on new oil and gas leases on federal lands.

Barrasso also faulted Haaland’s support for continued protection for grizzly bears in the Yellowstone region of the Rocky Mountains, despite a recommendation by the Fish and Wildlife Service that about 700 bears in parts of Montana, Wyoming and Idaho no longer need protections.

“Rep. Haaland has chosen to ignore the science and the scientists of the very department that she is now nominated to lead,” Barrasso said, calling on Interior to remove protections for the grizzly under the Endangered Species Act.

Sen. Maria Cantwell, D-Wash., said she appreciates Haaland’s leadership in the House on a range of issues, adding that Haaland’s status as a Native American “will give us an extra advantage on (tribal) issues that are so important to Indian Country overall.”

Murkowski said she had “some real misgivings” about Haaland because of her views on oil drilling and other energy issues, but said Native Alaskans, an important constituency in her rural state, had urged her to back Haaland.

“Quite honestly, we need (Haaland) to be a success,” Murkowski said.

Sen. Martin Heinrich, D-N.M., said he was disappointed at the rhetoric used by Barrasso and other Republicans. Heinrich, who lives in Haaland’s district, called her confirmation historic and said she “always has an open door and an open mind” to a range of views.

Fellow New Mexico Sen. Ben Ray Luján, who presided over the Senate during the vote on Haaland’s nomination, said she brings “a unique and long-overdue perspective” to the Interior Department’s mission to protect natural resources and honor responsibilities to tribes and other native people.

“I have no doubt that Secretary Haaland will leave an indelible mark on the Department of Interior, and I look forward to continuing to work with her to make a difference for the people of New Mexico,” he said.

Previous Article
In early foreign policy tests, Biden takes on world as it is
Next Article
Stocks extend gains for fifth day, led by technology shares