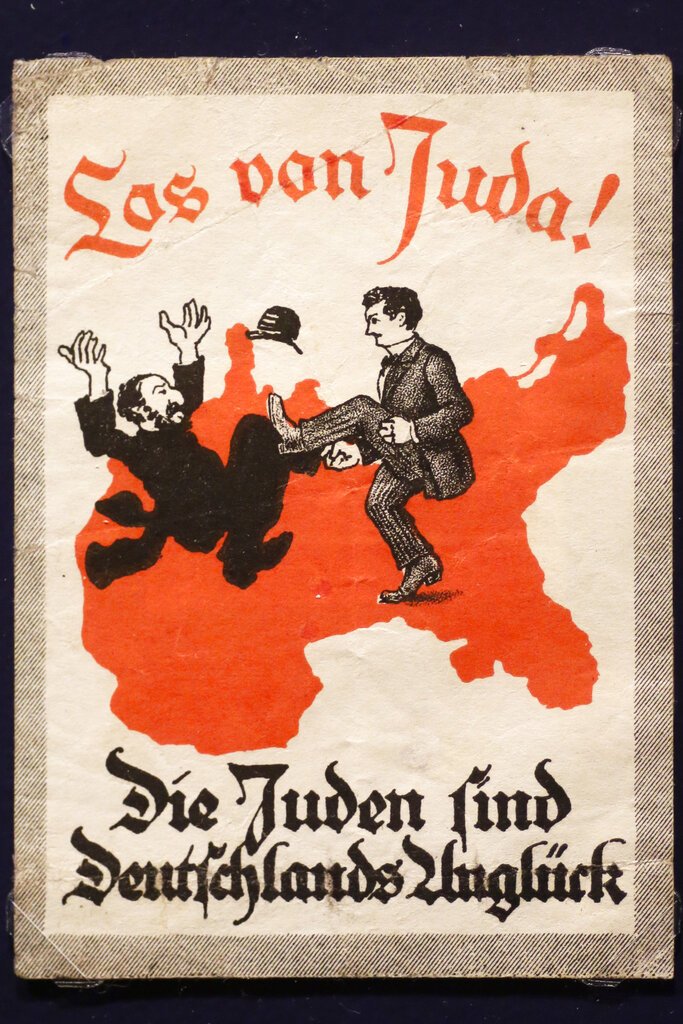 The rise in anti-Semitism during the pandemic has prompted Holocaust survivors to turn to social media to educate people about how hate can turn to murder. The campaign uses the #ItStartedWithWords hashtag. The Associated Press has the story:

BERLIN (AP) — Alarmed by a rise in online anti-Semitism during the pandemic, coupled with studies indicating younger generations lack even basic knowledge of the Nazi genocide, Holocaust survivors are taking to social media to share their experiences of how hate speech paved the way for mass murder.

With short video messages recounting their stories, participants in the #ItStartedWithWords campaign hope to educate people about how the Nazis embarked on an insidious campaign to dehumanize and marginalize Jews — years before death camps were established to carry out murder on an industrial scale.

Six individual videos and a compilation were being released Thursday over Facebook, Instagram and Twitter, followed by one video per week. The posts include a link to a webpage with more testimonies and teaching materials.

“There aren’t too many of us going out and speaking anymore, we’re few in numbers but our voices are heard,” Sidney Zoltak, an 89-year-old survivor from Poland, told The Associated Press in a telephone interview from Montreal.

Once the Nazi party came to power in Germany in 1933, its leaders immediately set about making good on their pledges to “Aryanize” the country, segregating and marginalizing the Jewish population.

Related: Rep. Greene Under Attack by GOP For Holocaust Remarks

The Nazi government encouraged the boycott of Jewish businesses, which were daubed with the Star of David or the word “Jude” — Jew. Propaganda posters and films suggested Jews were “vermin,” comparing them to rats and insects, while new laws were passed to restrict all aspects of Jews’ lives.

Charlotte Knobloch, who was born in Munich in 1932, recalls in her video message how her neighbors suddenly forbid their children from playing with her or other Jews.

”I was 4 years old,” Knobloch remembered. “I didn’t even know what Jews were.”

The campaign, launched to coincide with Israel’s Holocaust Remembrance Day, was organized by the New York-based Conference on Jewish Material Claims Against Germany, which negotiates compensation for victims. It is backed by many organizations, including the United Nations.

It comes as a study released this week by Israeli researchers found that coronavirus lockdowns last year shifted some anti-Semitic hatred online, where conspiracy theories blaming Jews for the pandemic’s medical and economic devastation abounded.

Although the annual report by Tel Aviv University’s researchers on anti-Semitism showed that the social isolation of the pandemic resulted in fewer acts of violence against Jews across 40 countries, Jewish leaders expressed concern that online vitriol could lead to physical attacks when the lockdowns end.

U.S. Capitol insurgent wore a Nazi slogan on his shirt

Supporting the new online campaign, the International Auschwitz Committee noted that one of the men who stormed the U.S. Capitol in January wore a sweatshirt with the slogan “Camp Auschwitz: Work Brings Freedom.”

“The survivors of Auschwitz experienced first-hand what it is like when words become deeds,” the organization wrote. “Their message to us: do not be indifferent!”

Recent surveys by the Claims Conference in several countries have also revealed a lack of knowledge about the Holocaust among young people, which the organization hopes the campaign will help address.

In a 50-state study of Millennials and Generation Z-age people in the U.S. last year, researchers found that 63% of respondents did not know that 6 million Jews were killed in the Holocaust and 48% could not name a single death camp or concentration camp.

Claims Conference President Gideon Taylor told the AP that the surveys highlighted that “messages and concepts and ideas that were common and understood 20 years ago, maybe even 10 years ago” are not any more.

After the success of a social media campaign last year using the messages of survivors to pressure Facebook to ban posts that deny or distort the Holocaust, Taylor said it made sense to seek social media help again.

“The Holocaust didn’t come out of nowhere,” he said. “Before Jews were driven out of their schools, their jobs, their homes, before the synagogues, shops and businesses were destroyed. And before there were ghettos and camps and cattle cars, words were used to stoke the fires of hate.”

“And who can draw that line from dangerous words to horrific acts better than those who lived through the depths of human depravity?”

For Zoltak, the escalation from words to deeds came rapidly after the invading Nazi army occupied his town east of Warsaw in mid-1941. The Nazis rapidly implemented anti-Semitic laws that they had already instituted in the western part of Poland they occupied two years earlier and forced Zoltak’s parents into slave labor, he said.

A year later, the Germans forced all of the town’s Jews — about half the population of 15,000 — into a ghetto segregated from the rest of the town, subject to strict regulations and kept on restricted food rations.

Three months later, the Nazis liquidated the ghetto, transporting its residents to the Treblinka death camp or killing them along the way.

Zoltak was one of the few lucky ones, managing to escape with his parents into a nearby forest. They hid around the area until the next spring, when they were taken in by a Catholic family in a nearby farm and sheltered for the duration of the war.

After the war, he returned to his town and learned that all but 70 of its 7,000 Jews had been killed, including all of his classmates and his father’s entire family.

“It’s sometimes hard to understand,” he said. “We’re not actually dealing with numbers, they were humans who had a name, who had families.”

Previous Article
Who are America’s friends in the Arab world?
Next Article
Biden administration resumes UN funding of Palestinians