Rep. Greene under attack by GOP for Holocaust remarks 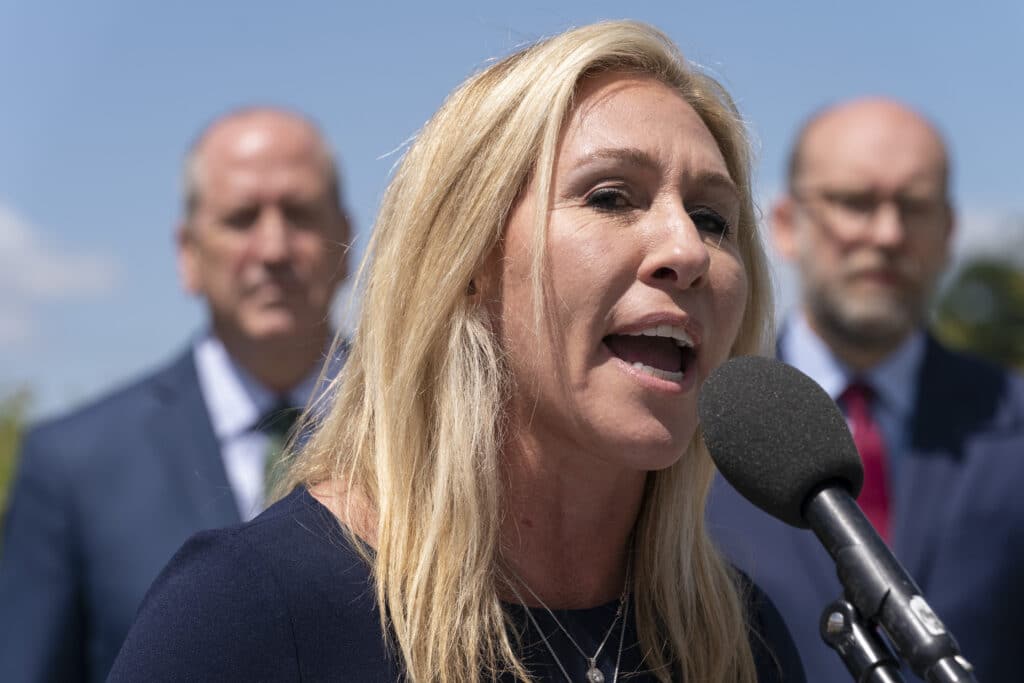 GOP Rep. Marjorie Taylor Greene is under criticism by her own party for comparing COVID-19 rules to the treatment of Jews under Nazi Germany. One tweet stated, “Vaccinated employees get a vaccination logo just like the Nazi’s forced Jewish people to wear a gold star.” The Associated Press has the story:

“Marjorie is wrong, and her intentional decision to compare the horrors of the Holocaust with wearing masks is appalling,” House Republican Leader Kevin McCarthy, R-Calif., said in a statement, which stopped short of calling for Greene to face disciplinary measures. “The fact that this needs to be stated today is deeply troubling.”

Greene, a conservative firebrand from Georgia and ally of former President Donald Trump, has thrived on stirring controversy, pushing conspiracy theories and forcefully confronting her colleagues since taking her seat in the House in January. But, until now, Republican leaders have proven hesitant to criticize her and refused to join with Democrats earlier this year when they voted to strip her of committee assignments.

Remarks during ‘The Water Cooler with David Brody’

Their rebuke Tuesday came after Greene made an appearance on a conservative podcast, “The Water Cooler with David Brody,” released last Thursday. In her interview, Greene excoriated safety protocols adopted by House Democrats, including a requirement that masks be worn on the House floor. She also called House Speaker Nancy Pelosi “mentally ill” and suggested that the rules were comparable to the treatment of Jews during the Holocaust.

“You know, we can look back in a time and history where people were told to wear a gold star. And they were definitely treated like second-class citizens, so much so that they were put in trains and taken to gas chambers in Nazi Germany,” Greene said on the podcast. “This is exactly the type of abuse that Nancy Pelosi is talking about.”

After her remarks sparked a firestorm of online criticism, Greene leaned in to the comparison further.

On Tuesday, she tweeted out a news story about a grocery store chain that plans to allow vaccinated employees to go maskless. Those who do would have a logo on their nametags indicating they had been vaccinated.

“Vaccinated employees get a vaccination logo just like the Nazi’s forced Jewish people to wear a gold star,” Greene tweeted.

Pelosi, who previously suggested that Greene could face an ethics inquiry, called her comments “so beyond reprehensible” that they should have “no place in our country.” Democratic Illinois Rep. Brad Schneider proposed censuring Greene.

Senate Minority Leader Mitch McConnell, R-Ky., called Greene’s comments one of her “frequent outbursts that are absolutely outrageous and reprehensible.” Still, he said any disciplinary action against her would have to come from the House.

Rep. Elise Stefanik, the No. 3 House GOP leader, said “equating mask wearing and vaccines to the Holocaust” minimized “the most significant human atrocities ever committed.”

The furor is just the latest provocative chapter in the activist-turned-lawmaker’s brief tenure in the House.

Earlier this month, Greene followed Rep. Alexandria Ocasio-Cortez off the House floor, shouting that the Democrat supported “terrorists” and doesn’t “care about the American people.” She also appeared in Facebook Live video filmed outside Ocasio-Cortez’s office, taunting the congresswoman through the mail slot of a locked door to “get rid of your diaper and come out and be able to talk to the American citizens.”

Before her election, Greene supported Facebook posts that advocated violence against Democrats and the FBI. In one 2018 post, she speculated that “lasers or blue beams of light” controlled by a left-wing cabal tied to a powerful Jewish family could have been responsible for sparking California wildfires.

And in February 2019, Greene appeared in an online video filmed at the U.S. Capitol, arguing that two Muslim lawmakers weren’t “really official” members of Congress because they didn’t take the oath of office on the Bible.