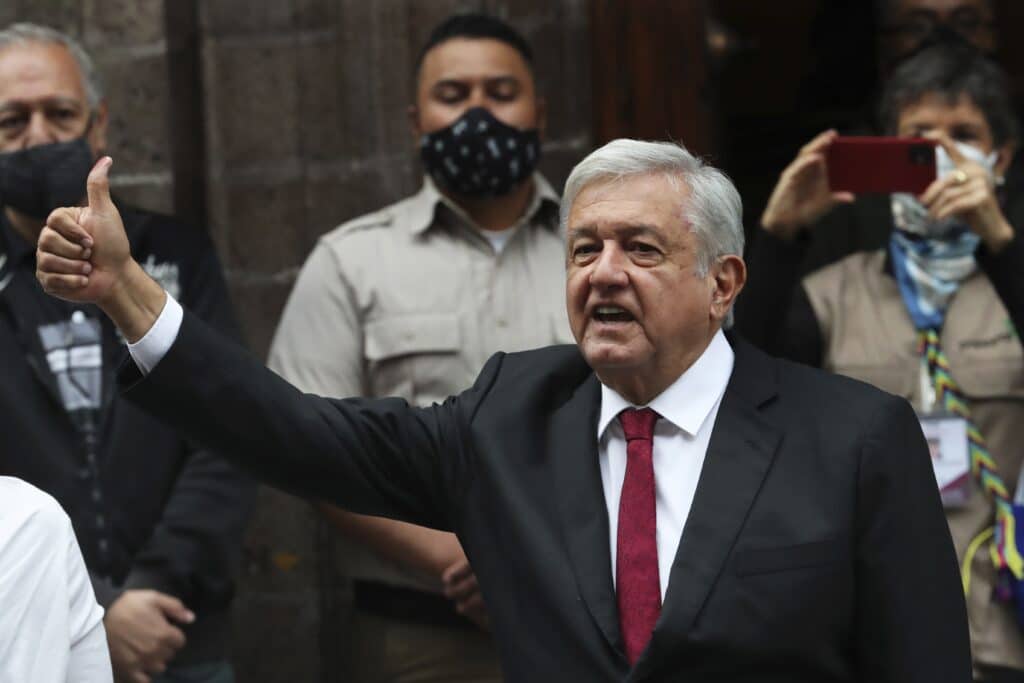 Although they didn’t achieve a two-thirds majority, the party of Mexican President Andrés Manuel López Obrador appear to have kept a majority in the lower chamber of Mexico’s congress. The Morena party will need to rely on votes from its allies in the Workers Party and Green Party. The Associated Press has the story:

MEXICO CITY (AP) — President Andrés Manuel López Obrador’s party and its allies on Monday appeared poised to maintain their majority in Mexico’s lower chamber of the congress, but fell short of a two-thirds majority as some voters boosted the struggling opposition, according to initial election results.

Electoral authorities released “quick count” results based on voting samples that allow estimates of the voting trends to determine the rough potential makeup of the Chamber of Deputies late Sunday.

López Obrador’s Morena party will have to rely on votes from its allies in the Workers Party and Green Party, but together they were expected to capture between 265 and 292 seats in the 500-seat chamber. Morena alone was expected to win 190 to 203 seats.

That would signal a significant decline for the president’s party. In the current congress, Morena has a simple majority, holding 253 seats on its own. It would also deprive the president of a qualified majority of two-thirds required to approve constitutional reforms.

López Obrador appeared to acknowledge that new reality Monday. He praised the election as “free, clean” and said Mexicans had shown a degree of political maturity “never seen.”

“You voted for two different and opposed plans, above all in the federal election,” he said. “Those of the transformation plan are going to have the majority in the Chamber of Deputies and this means guaranteeing the sufficient budget for the most in need.”

The results give the president sufficient budgetary control to continue his train and refinery-building plans and cash handout programs, but may deny him congressional backing to escalate his ongoing spats with the courts and regulatory agencies.

“The voters have given a mandate that says ‘I am not writing a blank check for any of the movements in Mexico’,” said Luis Miguel Pérez Juárez, a political science expert at the Monterrey Technological university.

The opposition alliance made up of the Institutional Revolutionary Party, National Action Party and Party of the Democratic Revolution were estimated to win between 181 and 213 seats. Those would be gains for those parties, which have often appeared rudderless in the face of López Obrador’s popularity.

Even without López Obrador on the ballot, the mid-term elections were seen by many as a referendum on his administration and his ability to continue what he calls the “Fourth Transformation” of Mexico. Turnout was high for mid-term elections, edging above 51% of eligible voters.

López Obrador’s party did better than expected in state governors’ races, and appeared headed for wins in at least ten of the 15 states up for grabs. But the president’s party was battered in Mexico City, long considered his stronghold and where he once served as mayor. The capital suffered more than many other areas during the coronavirus pandemic.

López Obrador’s critics had depicted the elections as a chance to stop the still-popular president from concentrating more power and weakening checks and balances. The president said the opposition is dominated by conservatives who oppose his campaign against corruption and wasteful spending.

López Obrador has complained about courts and independent regulatory agencies that have blocked some of his tougher proposals to empower state-owned industries. Opponents warned that if he won a majority, he might try to subjugate courts and regulatory agencies created during Mexico’s decades-long transition to full democracy.

After polls closed, Lorenzo Córdova, president of the National Electoral Institute, declared the election a success. He said only 30 of more than 130,000 polling places across the country were not able to open due to a variety of circumstances.

Half of those unopened polling places were in the southern state of Oaxaca where voting materials were stolen or damaged, institute Executive Secretary Edmundo Jacobo said Sunday night.

Representatives of the major parties speaking at the electoral institute’s general council meeting applauded the conduct of Sunday’s vote amid the pandemic, despite noting that the run-up to voting was one of the most violent in recent times.

Violence marked the days leading up to the vote

As for much of the campaign, violence marked the days leading up to the vote. On Saturday, an employee of the state prosecutors’ office in Chiapas who was not authorized to be quoted said five people who were carrying voting material to polling places were ambushed and killed on a rural highway. Those killed appeared to be volunteers, not government employees.

And on Sunday, prosecutors said another four people were shot to death in another remote Chiapas mountain town in what appeared to be a politically motivated attack.

Nationwide, three dozen candidates were killed during the campaigns; almost all of the victims were running for one of the 20,000 local posts including mayors and town council up for grabs in 30 states. In Guanajuato state, Mexico’s most violent, a woman who stepped in as mayoral candidate after her mother was murdered won an overwhelming victory in the town of Moroleón.

López Obrador praised the otherwise peaceful elections, and even sent a message of recognition to the drug cartels that fuel much of the country’s violence.

“People who belong to organized crime behaved very well, in general, there were few acts of violence by these groups,” the president said. “I think the white-collar criminals acted worse.”

López Obrador has raised minimum wages and strengthened government aid programs like supplementary payments to the elderly, students and training programs for youths. He has also created a quasi-military National Guard and given the army a huge role in building his pet projects, which include trains, an oil refinery and airports.

But he has not hewed to a traditional leftist line. He has maintained friendly if sometimes tension-fraught relations with the United States and willingly helped keep tens of thousands of Central American migrants from reaching the U.S. border. He abhors government debt or waste.

Opponents depict him as intolerant of criticism and obsessed with a nostalgic 1960s vision of Mexico, when oil was king and state-owned companies dominated many sectors of the economy. Socially conservative and a professed Christian “in the broadest sense,” he has angered feminists with his policies, but has pleased many Mexicans by living austerely.

The elections represent the first mass public events since the coronavirus pandemic hit the country over a year ago, though case numbers have fallen and Mexico has vaccinated about a quarter of adults. The estimated 350,000 fatalities in the pandemic — about 230,000 of them test-confirmed — do not appear to have played a major role in the campaigns, but weighed on voters’ minds.

By CHRISTOPHER SHERMAN and MARÍA VERZA