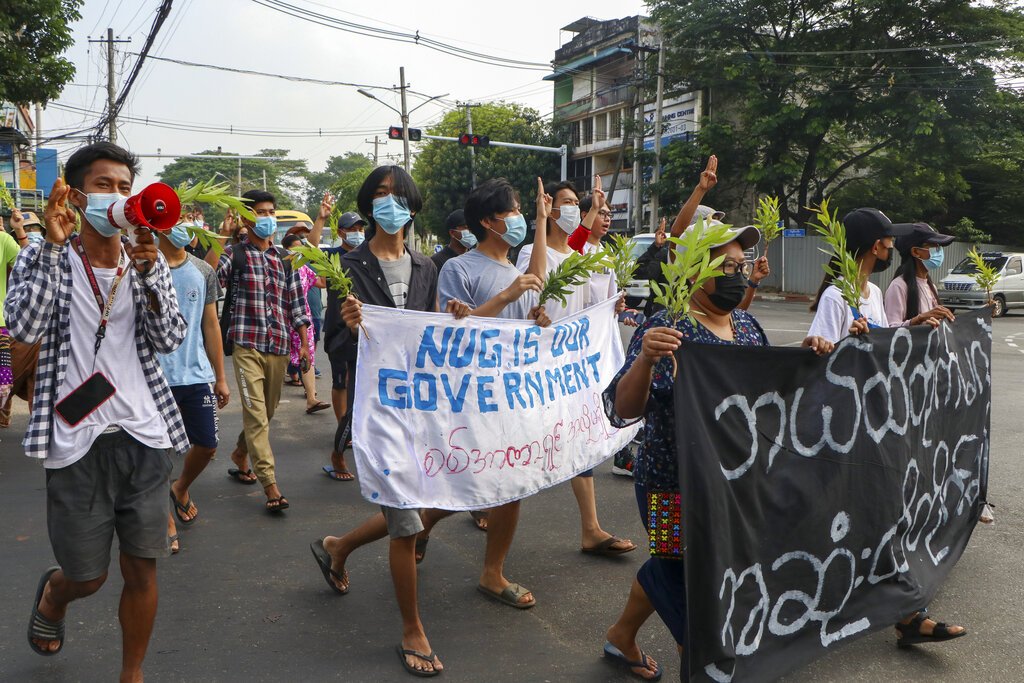 Although Southeast Asian leaders recently came to a “five-point consensus” on the violence in Myanmar, young people continue to defiantly rally in the streets of Yangon. Myanmar’s shadow National Unity Government was not included in the Association of Southeast Asian Nations’ junta. The Associated Press has the story:

The group of mainly young people flooded into the streets of a Yangon neighborhood carrying banners and brandishing the three-fingered salute which the movement has adopted as its symbol.

Demonstrations have continued in many parts of the country since Saturday’s meeting of leaders from the Association of Southeast Asian Nations, as have arrests and beatings by security forces despite an apparent agreement by junta leader Senior Gen. Min Aung Hlaing to end the violence.

More than 700 protesters and bystanders have been killed by the security forces since the Feb. 1 coup, according to several detailed estimates. The junta’s own figure is roughly one-third of that. It also says it does not use disproportionate force to put down what it describes as rioting.

After chanting their opposition to the junta and listening to speeches, the protesters quickly scattered to avoid any confrontation with police or soldiers.

In Monday’s protests and online, many expressed dissatisfaction with the outcome of Saturday’s ASEAN meeting in Jakarta, especially the lack of a demand for the release of political prisoners. The country’s former elected leader, Aung San Suu Kyi, was arrested in the coup and is among an estimated 3,400 people still being held.

He said she aims to maintain dialogues with key parties including the military. So far, the military has refused to let Schraner Burgener visit Myanmar and Haq refused to disclose any details of her discussion with the commander.

U.N. Secretary-General Antonio Guterres and Schraner Burgener are also continuing “to urge the release of all detainees and for the full respect of human rights and fundamental freedoms,” Haq said.

Foes of the junta were also unhappy that they was no representative at the meeting from the shadow National Unity Government, which they call the country’s only legitimate government.

The NUG was recently established by elected lawmakers who were barred from taking their seats by the military when it seized power.

The shadow government’s initial reaction to the ASEAN meeting was guardedly hopeful.

“We look forward to firm action by ASEAN to follow up its decisions and to restore our democracy and freedom for our people and for the region,” NUG spokesman Dr. Sasa said in a statement posted on social media.

China said it welcomed the meeting, which it called “a good start for all parties to promote an open and inclusive ‘ASEAN approach’ to de-escalate the situation in Myanmar.”

“Of course, one meeting cannot completely solve all the problems,” Foreign Ministry spokesperson Wang Wenbin said in Beijing on Monday.

China is widely seen as providing essential political and economic support to the junta.

Some involved observers have adopted more of a wait-and-see attitude.

Tom Andrews, the U.N.’s independent expert on human rights for Myanmar, said the ASEAN summit should be judged by the results in Myanmar.

“Will the killing stop? Will the terrorizing of neighborhoods end? Will the thousands abducted be released? Will impunity persist? Anxious to work w ASEAN’s Spec Envoy & monitor Summit’s actual results,” he wrote Sunday on Twitter.

In Myanmar’s capital, Naypyitaw, Suu Kyi expressed frustration in a court hearing on Monday at delays in responding to her request to meet face-to-face with her lawyers to prepare a defense against several criminal charges against her.

Suu Kyi has been charged with two counts of breaching a law intended to control the spread of the coronavirus, illegally importing walkie-talkies, unlicensed use of them, inciting public unrest and breaking the official secrets act.

Her supporters say the charges are politically motivated, with the slow pace of the cases serving as an excuse to keep her locked up. Win Myint, who was president in her government, is in the same predicament and faces some of the same charges.

Suu Kyi told the court in a hearing by video conference that she had asked to meet her lawyers a long time ago, and since then additional charges have been brought against her, said Min Min Soe, a member of her legal team.

Her next appointment before the court is on May 10.