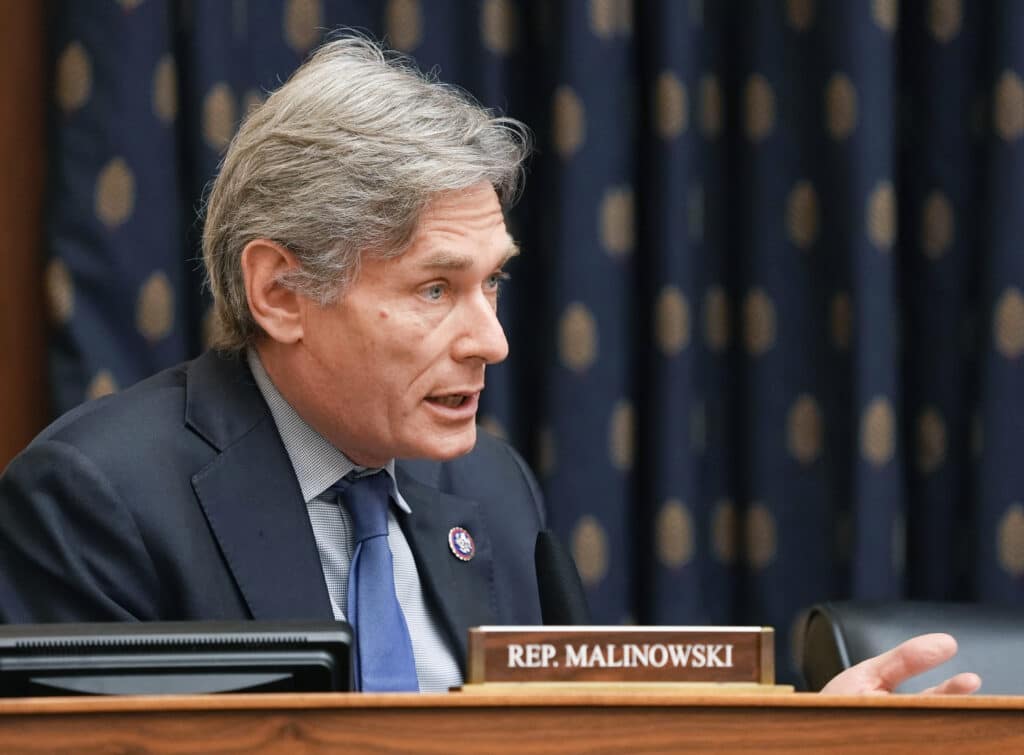 Although New Jersey Democratic Rep. Tom Malinowski once denounced those profiting from the coronavirus pandemic, evidence shows he’s been doing quite a bit of it himself. He bought or sold as much as $1 million of stock in medical and tech companies that had a stake in the virus response. The Associated Press has the story:

New Jersey Rep. Tom Malinowski comes across as a hypocrite for stock profits related to COVID-19

WASHINGTON (AP) — In the early days of the pandemic, New Jersey Rep. Tom Malinowski scolded those looking to capitalize on the once-in-a-century health crisis.

“This is not the time for anybody to be profiting off of selling ventilators, vaccines, drugs, treatments, PPE (personal protective equipment), anywhere in the world,” the two-term Democrat and former assistant secretary of state told MSNBC in April 2020.

Related: Biden Is Expected To Present Sweeping Plan For Families

He did not heed his own admonition.

Since early 2020, Malinowski has bought or sold as much as $1 million of stock in medical and tech companies that had a stake in the virus response, according to an analysis of records by The Associated Press. The trades were just one slice of a stock buying and selling spree by the congressman during that time, worth as much as $3.2 million, that he did not properly disclose.

The issue of congressional stock trading took on a new urgency last year when at least three senators were the subject of inquiries about whether they made financial decisions based on insider information. Though no one was charged, their dealings stirred outrage and highlighted the limitations of the Stock Act, a 2012 law intended to curtail stock market speculation by lawmakers.

Malinowski’s trades received little attention at the time. Yet his subsequent failure to report his trading activity to Congress as required by law, which was first reported by Business Insider, have made him the latest to face scrutiny, with two complaints filed against him with the Office of Congressional Ethics.

When millions were out of work and markets were hemorrhaging, Malinowski snapped up securities at bargain prices — profiting when valuations recovered. In other cases, he sold shares before they fell substantially, according to the AP’s analysis of a list of trades that his office said he made in 2020.

He also engaged in the controversial practice of short-selling stocks, placing bets that the values of specific businesses would decline at a time when many companies were pleading with the government for a financial lifeline.

“It boggles my mind why he’s doing it,” said Richard Painter, a University of Minnesota law professor who served as President George W. Bush’s ethics attorney and later ran for Senate as a Democrat. “It’s a huge conflict of interest and not an acceptable situation.”

There is no indication Malinowski acted on inside information to make his investment decisions. Still, it’s difficult to assess the full scope of his financial activity. Nearly six months after 2020 drew to a close, mandatory reports to Congress detailing his trades have not been made public.

In an interview Thursday, Malinowski said his failure to file was “a mistake that I own 100%.” He said the reports, some of which were due over a year ago, have been submitted though not released by the congressional ethics office, which did not respond to a request for comment.

Malinowski said his broker handles all of his trading decisions and he does not speak to the firm about specific transactions. His office provided a statement from the firm, Gagnon Securities, stating that it made trades “without Congressman Malinowski’s input or prior knowledge.”

“At no point in the last 25 years have I directed, suggested, or even asked questions about a particular trade being made by my brokerage firm,” Malinowski said. He said the one exception was a request to sell stock that he was obligated to get rid of after joining President Barack Obama’s State Department in 2014.

He also said he was in the process of setting up a blind trust to hold his financial portfolio, which he will have no control over. He said other members of Congress should do the same.

Painter noted that Malinowski had ultimate control over his account when the trades were made, a fact the congressman acknowledged.

“Of course he is going to say his broker makes all the decisions,” Painter said.

The Stock Act, which proponents initially said would end stock speculation among members of Congress, passed with bipartisan support in 2012 in the wake of a stock trading scandal.

The law bars members from using inside information to make investment decisions and requires that all stock trades be reported to Congress within 45 days. Yet in the nearly 10 years since it was enacted, no one has been prosecuted under it even as many members continue to conspicuously trade.

“I thought no congressman or senator would want to get caught in that sort of controversy, even if it just had the appearance of insider trading,” said Craig Holman, a lobbyist for the Washington-based government watchdog group Public Citizen. “But clearly there’s still a significant number of members of Congress who still want to abuse their access to insider knowledge.”

Trades by Malinowski follow a familiar, albeit less overt pattern when compared with others who have drawn scrutiny.

Some of the companies he invested in were developing COVID-19 testing or therapeutics to combat illnesses caused by the disease. Last June, he bought between $1,001 and $15,000 worth of shares of TFF Pharmaceuticals, which is developing an antibody treatment. They have nearly doubled in value since.

In November, he sold between $15,001 and $50,000 worth of stock in drug maker Merck, which he had not previously disclosed owning. The company’s value tumbled two months later after it announced it would end its efforts to develop a COVID-19 vaccine.

In at least one case Malinowski benefited from exceptional timing.

In February 2020, days after members of Congress were briefed on the virus, records show Malinowski sold between $1,001 and $15,000 shares in Kimco Realty, a company that owns shopping centers across the U.S. A month later, when the company’s share price dropped nearly 50%, he bought back far more stock in the company, worth somewhere between $15,001 and $50,000. They’ve increased in value by 50% since.

“I don’t think it would be possible for any investor in the market to instruct their broker not to take into account the most important thing happening in the economy,” Malinowski said of the pandemic.

But it is Malinowski’s short selling of stocks that government watchdogs find particularly troubling.

A short sale is a stock transaction where an investor borrows shares in a company and sells them in hopes of buying them back later at a lower price and pocketing the difference. It’s a practice that during the pandemic has come under criticism from some economists and academic experts because it has the potential to throttle existing market anxiety, drive rumors and lead to irrational buying decisions that could harm otherwise solid companies.

“There is merit to banning short selling during a crisis period,” said Xu Jiang. “It can drive rumors and take down viable firms.”

Malinowski has been a prolific short seller throughout his time in Congress. It’s unclear whether he short sold in 2020 because the list of stock transactions released by his office is incomplete. But a recent disclosure reveals he short sold between $62,000 and $230,000 worth of stock in at least six companies in 2021.

“It is part of how investment on the stock market works in our capitalist system,” Malinowski said, later adding, “I don’t think there’s anything inherently wrong with Americans engaging in these kinds of normal investment activities.”

Whether Malinowski’s trading will pose a liability with voters will be tested as he campaigns for a third term and Democrats are on defense trying to hold their narrow House majority.

Republican Sens. David Perdue and Kelly Loeffler, of Georgia, both lost their runoff bids for the Senate in January after their own stock trades became a major campaign issue, handing control of the chamber to Democrats. Both were investigated by the Justice Department, but ultimately cleared.

Perdue had dumped between $1 million and $5 million worth of stock in a company where he was formerly a board member. After markets crashed, he bought it back and earned a windfall after its price skyrocketed.

Loeffler and her husband, the CEO and chairman of the parent company of the New York Stock Exchange, dumped millions of dollars in stock following a briefing on the virus.

Republican Sen. Richard Burr of North Carolina drew perhaps the most scrutiny for his trades. He stepped aside as chairman of the Senate Intelligence Committee chairman after the FBI obtained a search warrant to seize a cellphone.

Burr and his wife sold between $600,000 and $1.7 million in more than 30 transactions in late January and mid-February, just before the market began to dive and government health officials began to sound alarms about the virus. Burr was captured in a recording privately warning a group of influential constituents in early 2020 to prepare for economic devastation.

The Justice Department investigated Burr’s actions, but cleared him of wrongdoing.

Despite the spate of cases, congressional leaders have shown little appetite for strengthening stock trading rules. Yet the temptation to use insider information remains.

“We are constantly apprised, before the public has the information, about what specific provisions might benefit particular entities,” said Rep. Pramila Jayapal, D-Wash., who sponsored a bill that would ban lawmakers from stock trading. “What you saw during COVID was one of the most horrific examples.”

It’s not the first time Malinowski has run afoul of government trading rules.

As an assistant secretary of state during the Obama administration, he agreed to sell shares held in CNinsure Inc. following his 2014 confirmation to the post. In a letter to a State Department ethics lawyer, he acknowledged that the investment in the Chinese insurance company, now known as Fanhua Inc., posed a “heightened prospect of a conflict of interest” given his work, which dealt heavily with human rights abuses, including those by China.

Yet the stock remained in his portfolio for over a year, well beyond a 90-day window to sell that he agreed to, records show. He sold it for more than he initially reported it to be worth, collecting somewhere between $15,001 and $50,000 in June 2015, following a period in which the stock’s value was held down following allegations of fraud made against the company.

Malinowksi said he instructed his broker to sell the shares earlier, but it failed to do so. They were sold after he sent a June 2015 email inquiring about them.

“As we discussed last year, I can’t hold Chinese stocks (or any stocks from countries that might pose conflicts with my State Department job, which, to be safe, would include any country outside Europe/Canada). Could you make sure this is sold?” he said, according to an email provided by his office.

Some members of Congress, acknowledging the shortcomings of the Stock Act, are proposing a bipartisan bill that would require lawmakers to place assets like stock in a blind trust.

“I don’t know that you should be buying and selling stock when the people we represent are facing what will invariably be the most horrific and challenging years of their lives,” said Rep. Abigail Spanberger, a Democrat from Virginia who is co-sponsoring the bill with Republican Rep. Chip Roy of Texas. “If you are not willing to make certain sacrifices to be in public service, then perhaps there might be a different job that’s best for you.”