Police shot Chicago black man in the back 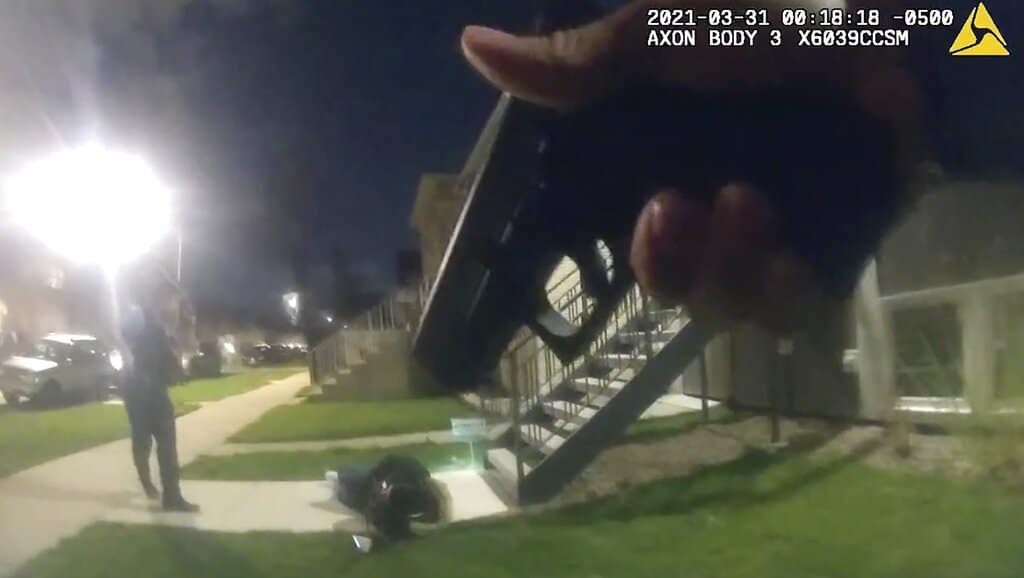 A video has been released showing that 22-year old black man Anthony Alvarez was shot in the back by a police officer when he was fleeing. Alvarez had a gun and the officer had yelled at him to drop it. The Associated Press has the story:

CHICAGO (AP) — A 22-year-old Chicago man who was fleeing police had his back turned and appeared to drop a gun when an officer fatally shot him late last month, video released Wednesday shows.

Chicago’s independent police review board released video and other investigation materials pertaining to the March 31 killing of Anthony Alvarez, a day after letting his family see it.

Before the release, Mayor Lori Lightfoot called for calm in a repeat of just two weeks ago, when she did the same before the release of footage showing police kill 13-year-old Adam Toledo.

In one of the clips posted on the Civilian Office of Police Accountability’s website, an officer’s body camera shows him chasing Alvarez. When Alvarez reaches a lawn in front of a house, the officer can be heard shouting, “Drop the gun! Drop the gun!” before he opens fire. Alvarez appears to drop a gun after five shots are fired and he falls to the ground.

As Alvarez lays on the ground, he asks, “Why you shooting me?” to which the officer responds, “You had a gun.” The officer later points to the weapon when other officers reach the scene.

It is clear in that shaky video that Alvarez had his back to the officer when he shot him. One officer can be heard saying there is a gun near Alvarez.

Alvarez’s family were provided the video on Tuesday. Todd Pugh, a lawyer for the family, said he watched the video, “And I saw a Chicago police officer shoot their son as he ran away from them.”

Lightfoot didn’t say what the video shows and police didn’t release the name or other details about the officer who shot Alverez, including the officer’s race. But a police report that COPA posted along with the video identified him as 29-year-old Evan Solano, a six-year veteran of the force.

While the officer in the shooting of Toledo was put on paid administrative leave, as routinely happens after police shootings, COPA made a point of recommending that Solano “be relieved of police powers during the pendency of this investigation.” COPA spokesman Ephraim Eaddy would not explain the reasons why the office recommended that Solano be stripped of his police powers already, but he did concede that the board rarely makes such a recommendation so early in an investigation.

Police and city officials haven’t said why police were pursuing Alvarez, but during a news conference before the video was released Wednesday, Lightfoot referred to a traffic offense.

“We can’t live in a world where a minor traffic offense results in someone being shot and killed,” Mayor Lori Lightfoot said Wednesday morning at an unrelated event. “That’s not acceptable to me and it shouldn’t be acceptable to anyone.”

Police union chief says there would be ‘spin’ over the shooting

The head of the police union, John Catanzara, said in a video statement before the video was released that the chase stemmed from an incident the day before in which Alvarez fled from police in a vehicle. The officer who shot Alvarez spotted him the next day and chased him on foot.

Catanzara also predicted that there would be an outcry and “spin” over the shooting because Alvarez, whom he didn’t identify by name, was shot in the back.

“There is nothing wrong with this shooting just because the bullet struck the offender from behind,” Catanzara said in a video recorded statement.

“It is important for the public to look at this with an open mind,” he said.

He said the officer clearly saw Alvarez holding the weapon and that when he was shot, Alvarez was turning in the direction of the officer.

“The officer fears (he) would turn and fire because that’s the motion he was making,” Catanzara said.

Earlier this month, COPA released footage of the shooting of Toledo. It showed a white officer shoot the Latino teen as he turned toward the officer raising his empty hands less than a second after the teen tossed aside or dropped a handgun.

As in Lightfoot’s statement before the release of the Toledo shooting footage, her statement in the Alvarez case was made in conjunction with attorneys for the family and had essentially the same message.

“The parties are acutely aware of the range of emotions that will accompany the release of these materials and we collectively issue this statement and ask that those who wish the express themselves do so peacefully and with respect for our communities and the residents of Chicago,” the Wednesday statement said.

Police say Alvarez brandished a gun while an officer chased him on foot. As it did after the Toledo shooting, the department posted a photo on social media of the weapon it says was found at the scene.

After the two shootings, Lightfoot announced that the police department would implement a new foot pursuit policy for its officers. The U.S. Department of Justice recommended that the department adopt such a policy four years ago as part of its broader critique of Chicago’s policing practices.

Police Superintendent David Brown said at a news conference after the Alvarez video was released that because COPA’s investigation is ongoing, he couldn’t discuss any details of the officers’ interaction with Alvarez, including why they stopped and chased him.

“I have to stay non-opinionated on facts until I get that complete investigation,” Brown said. “It’s really important for the independence and I think the transparency for the public. You wouldn’t want the police department swaying evidence before it’s completed.”

Brown said he hopes an updated policy on foot chases can be rolled out “within the next few weeks.”

“All that’s happening concurrently because it’s actually very timely given the current circumstances of … shootings as a result of foot pursuits,” he said.