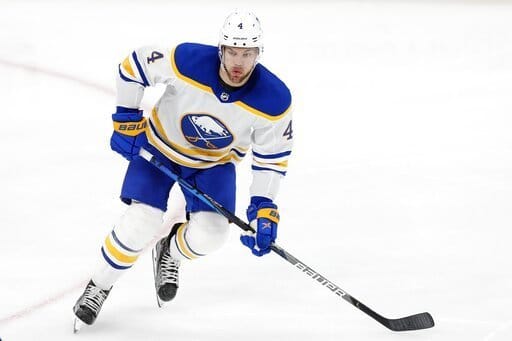 On April 12, NHL teams will be trading players, including some top ones that could help teams take the Stanley Cup. They include Taylor Hall, Kyle Palmieri, Mikael Granlund, Mattias Ekholm and Jonathan Bernier. The Associated Press has the story:

The NHL trade deadline is less than a week away and teams willing to deal have some potentially intriguing options.

Most franchises might be idle or severely limited because 18 teams have $1 million or less of salary cap space available, and the ceiling for what they can spend will not go up next season.

By the afternoon of April 12, though, some familiar faces will likely change places. In most if not all cases, the traded players will leave teams with little hope of hoisting the Stanley Cup to franchises with a shot to contend for the coveted prize.

Here’s a look at some of the top players who appear to be available — for the right price — in the days leading to the deadline:

The 29-year-old forward bet on himself, signing a one-year deal for $8 million with Buffalo after turning down longer-term offers from numerous teams. It hasn’t worked out for him or the Sabres. Hall has scored just two goals and has 19 points in 37 games for the league’s last-place team.

A contending team, though, would be happy to acquire the 2018 NHL MVP with 220 career goals and 582 points since Edmonton drafted him No. 1 overall in 2010. In another city, Hall would also be especially motivated to showcase his skills before becoming a free agent again this summer.

The New Jersey Devils, who are ahead of only Buffalo in the East Division, held the 30-year-old winger out of the lineup Sunday in a loss to Washington for precautionary reasons. His agent said the move was made in anticipation of a trade.

Palmieri has scored at least 24 goals in each of his first five years with New Jersey, but he has struggled along with many Devils this season. He has eight goals and 17 points in 34 games. With an expiring contract, a playoff-bound franchise would get a boost on perhaps its third line by trading for him.

The Nashville Predators are in the mix to make the playoffs, but forward Mikael Granlund gives them an asset to move if they decide to be sellers. The 29-year-old center re-signed with Nashville in December and his expiring, one-year $3.75 isn’t going to scare suitors.

Granlund has just eight goals and 15 points this season, but a change of scenery may help him produce as he did in Minnesota. He had nearly 70 points in consecutive seasons with the Wild before they traded him to the Predators two years ago.

Unlike most of the players potentially available in a trade, the 30-year-old defenseman does not have an expiring contract. Having him under contract next season with a relatively reasonable $3.75 million cap hit might make him more attractive, but it probably makes the price to acquire him higher. Ekholm has 50 career goals and 211 points, all with the Predators since they drafted him in the fourth round in 2009.

The rebuilding Detroit Red Wings should be able to add to their collection of draft picks by trading the 32-year-old goaltender with 160 career wins if he can show teams he’s healthy. Bernier has been practicing lately, moving closer to playing for the first time since a lower-body injury took him off the ice March 18.

Despite playing for one of the NHL’s worst teams, he is 8-6 with a 2.78 goals-against average and has stopped 92% of the many shots that have made it to the net.