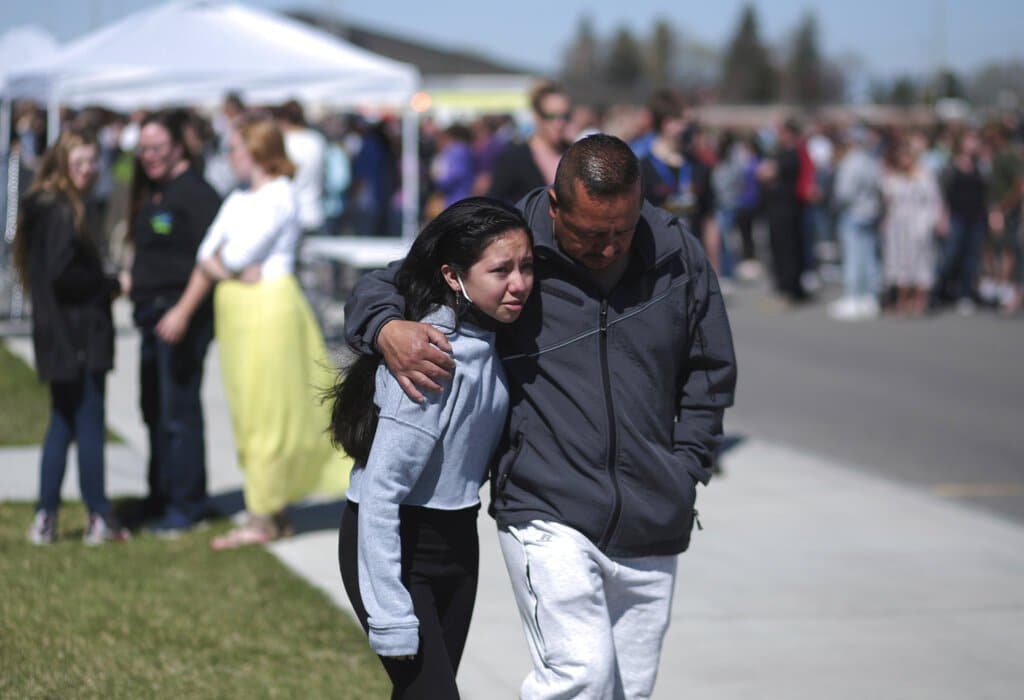 A male student injured three people with a gun at a middle school in Idaho Thursday morning, although none of them suffered injuries directly from the bullets. The student has been taken into custody. Two students and a custodian were hurt. The Associated Press has the story:

BOISE, Idaho (AP) — A shooting at an eastern Idaho middle school Thursday injured two students and a custodian, and a male student has been taken into custody, authorities said.

The victims’ injuries were not believed to be life-threatening, Jefferson County Sheriff Steve Anderson said.

“Today we had the worst nightmare a school district could encounter. We had a school shooting here at Rigby Middle School,” Jefferson School District Superintendent Chad Martin said. “What we know so far is the shooter has been apprehended. There is no further threat to the students.”

Police were called to the school around 9:15 a.m. Multiple law enforcement agencies were on scene.

Students were evacuated to a nearby high school, and parents lined up to be reunited with their children.

Bonneville County sheriff’s Sgt. Bryan Lovell said the investigation is still underway and no additional information was available. He said the school was still in the process of accounting for and releasing all the students.

Rigby is a small city about 95 miles (145 kilometers) southwest of Yellowstone National Park. Rigby Middle School has about 1,500 students in sixth through eighth grades, according to the National Center for Education Statistics.

“I am praying for the lives and safety of those involved in today’s tragic events,” Gov. Brad Little said in a prepared statement. “Thank you to our law enforcement agencies and school leaders for their efforts in responding to the incident.”

The president of the Idaho Education Association, Layne McInelly, said the union was ready to provide whatever support school staffers, students and the community needs.

“We send positive thoughts to the victims of this tragic incident and hope for their full and rapid recovery. Patience will need to be at a premium while school officials and law enforcement agencies investigate the situation,” McInelly said in a statement.

Mayor: ‘Showing up is NOT helpful’

Community members were rounding up bottles of water and packaged snacks to bring to students while they waited in hot weather to be reunited with their families. Rebecca Noah Casper, mayor of nearby Idaho Falls, said people hoping to help by donating water and snacks should bring them to the Upper Valley Child Advocacy Center, rather than going to the school.

“Idahoans want to help. Showing up is NOT helpful. Praying and sending good thoughts is NEVER inappropriate,” Casper tweeted.

The attack appears to be Idaho’s second school shooting. In 1999, a student at a high school in Notus fired a shotgun several times. No one was struck by the gunfire, but one student was injured by ricocheting debris from the first shell.

In 1989, a student at Rigby Junior High pulled a gun, threatened a teacher and students, and took a 14-year-old girl hostage, according to a Deseret News report. Police safely rescued the hostage from a nearby church about an hour later and took the teen into custody. No one was shot in that incident.