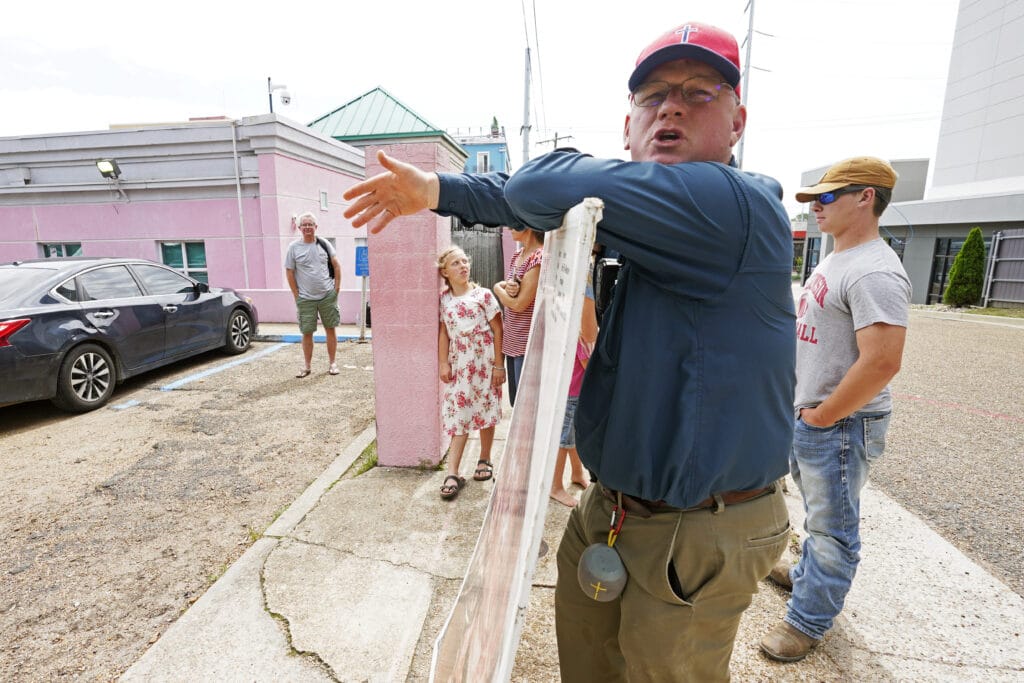 As the U.S. Supreme Court prepares to hear oral arguments this fall over a new Mississippi law that bans abortions past 15 weeks of pregnancy, attention is being drawn to the only abortion clinic in Mississippi. The ruling would not affect it, because the facility only performs abortions prior to that stage. But it has become quite the scene for demonstrators. The Associated Press has the story:

JACKSON, Miss. (AP) — The bright pink building in an eclectic neighborhood of Mississippi’s capital goes by different names. To the anti-abortion protesters whose demonstrations have sparked a noise ordinance, it is an “abortion mill.” To those who work and volunteer there, the facility known as the “pink house” provides the last safe haven in Mississippi for women who choose to have an abortion.

Now, the only abortion clinic in Mississippi is facing what could be its biggest challenge. The U.S. Supreme Court said Monday that it will hear arguments this fall over a Mississippi law that would limit abortions after 15 weeks of pregnancy — a case designed to test how far a court remade under former President Donald Trump is willing to go to restrict the right to an abortion.

The 2018 Mississippi law has been on hold because of the court fight. If justices allow it to take effect, that wouldn’t have a huge impact on who can get an abortion in Mississippi. Health care providers at Jackson Women’s Health Organization don’t perform abortions after 16 weeks. But clinic director Shannon Brewer said upholding the ban would prompt lawmakers in conservative states to push to more restrictions.

“They’ll steadily chip away at it. And then once they know they can, they’re going to constantly do it,” Brewer said Tuesday.

As states have enacted stricter laws and the number of clinics has declined, thousands of women have crossed state lines for abortion. A 2019 analysis by The Associated Press found at least 276,000 women terminated pregnancies outside their home state between 2012 and 2017. In pockets of the Midwest, South and Mountain West, the number of women terminating a pregnancy in another state rose considerably, particularly where a lack of clinics meant the closest provider was in another state or where less restrictive policies made it easier and quicker to have an abortion there.

No doctors in Mississippi are willing to perform abortions

With no doctors in Mississippi willing to do abortions, five out-of-state doctors rotate through Jackson. Some patients travel hours from small towns in one of the poorest states of the country — first for counseling and then 24 hours later for the abortion.

One woman who has ended two pregnancies at the clinic said she has never had a moment’s regret over those decisions. At the time, she was in her 30s and did what was best for herself and her young child, she said.

“I want women to understand that it’s OK and it’s not something that you have to feel guilty about,” she said. She spoke to The Associated Press on condition of anonymity because she’s in a court dispute with her child’s father and she believes speaking publicly about her abortions could hurt her in that case.

Outside the clinic, anti-abortion protesters face off against volunteer escorts. Demonstrators often try to block cars from entering the clinic parking lot. Some pray, sing or hold posters with graphic photos of aborted fetuses. Others climb ladders to look over a fence that surrounds the clinic, yelling at the volunteer escorts who call themselves “pink house defenders” and the patients they accompany inside.

Doug Lane, president of Pastors for Life, is a frequent presence in front of the pink building where he tries to persuade women and girls to forgo abortion. He said he and other protesters are exercising their free-speech rights and they sometimes change women’s minds, directing them to a nearby crisis pregnancy center that offers ultrasounds and baby clothing.

“We have a right to be heard, even by people who disagree with us and object to us,” Lane said.

The protests outside the clinic have become a flashpoint in its Jackson neighborhood.

Two restaurants sit directly across a street from the building. Some days, protesters are silent or pray quietly to themselves. Other times, they use bullhorns that can be heard inside the restaurants, even with doors closed. Cars driving by honk in support or admonishment.

On a recent day, families at one of the restaurants ate outside at a cluster of tables no more than 20 feet (6 meters) from two children sitting silently holding signs saying, “We are ambassadors of Jesus Christ.” A woman passed back and forth praying under her breath and holding a sign: “Pray to end abortion.”

Ordinance passed to limit noise outside medical facilities was repealed

In 2019, the Jackson City Council enacted an ordinance to limit noise outside medical facilities. Some council members said their action was in response to complaints about activity outside the abortion clinic, but the city backed down and repealed the ordinance a year later after a lawsuit challenged the rule.

Clinic director Brewer said all the restrictions and protests aren’t going to stop abortions in Mississippi — they just serve to make it more dangerous. She said the people who oppose abortion pretend to care about the women and their future children but if they really cared, they’d spend more time taking care of children once they’re born by paying for things like better health care or child care.

“It’s not going to stop abortions in Mississippi. Abortions were going on in Mississippi before Roe v. Wade,” Brewer said. “So I think that they’re not thinking it through, or they just really don’t care.”

Previous Article
NYC schools to all open in person this fall
Next Article
Stocks are back up, including S&P 500