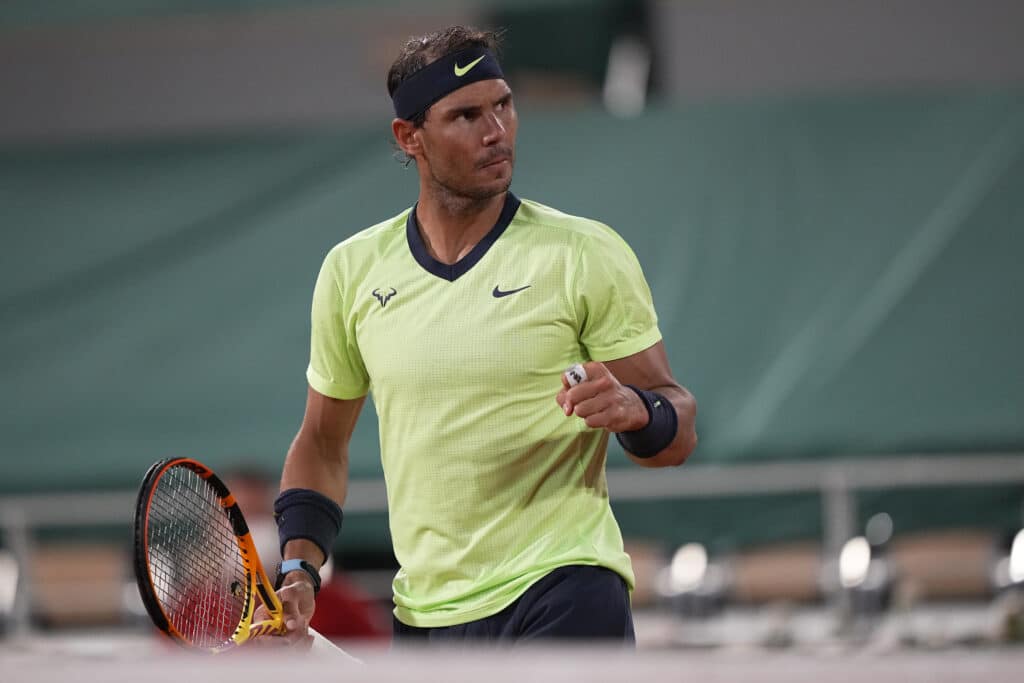 Spain’s Rafael Nadal and Switzerland’s Roger Federer are having outstanding performances at the French Open. Spain’s up-and-coming Carlos Alcaraz is also doing well. The Associated Press has the story on key performances there:

Standouts at 2021 Roland-Garros tennis competition include two from Spain

PARIS (AP) — The Latest on the French Open (all times local):

Rafael Nadal’s record against Richard Gasquet improved to 17-0 as he reached the third round of the French Open with a 6-0, 7-5, 6-2 win.

The defending champion improved his Roland Garros record to 102-2 as he bids to win a 21st Grand Slam title to stand alone among men’s tennis greats. Roger Federer also has 20 majors.

Nadal was celebrating his 35th birthday but had no fans there to watch him play during the night session because coronavirus rules required them all to leave by 9 p.m.

He sealed the victory on his second match point when Gasquet hit a forehand into the net following a brief rally.

Related: Analysis: Is It Safe To Attend Big Sporting Events Yet?

Defending champion Iga Swiatek has advanced to the third round of the French Open by beating Rebecca Peterson 6-1, 6-1.

Swiatek, who turned 20 Monday, seeks to become the first woman to win consecutive Roland Garros titles since Justine Henin won her third in a row in 2007.

She next faces the dangerous Anett Kontaveit, who is seeded 30th.

Roger Federer improved to 10-1 against Marin Cilic to reach the third round at Roland Garros.

The 20-time Grand Slam champion is playing his first major tournament in 16 months.

In the first point of the tiebreaker, Cilic hit a serve near the line and Federer conceded it as an ace. The umpire came out of his seat and called it long, but Federer gave Cilic the point anyway. Replay showed the ball was long.

Cilic then double-faulted in the fourth game of the fourth set to go down 3-1.

Novak Djokovic reached the third round of the French Open for the 16th straight year with a straight-set win over clay-court specialist Pablo Cuevas.

The top-ranked Serb prevailed 6-3, 6-2, 6-4 after saving eight of the nine break points he faced.

Djokovic showed impressive language skills, too, speaking in an excellent French during his on court interview.

The 2016 champion said: “He has a lot of power and spin on both the forehand and backhand, but I stayed focused and I think the third set was really difficult for me. I raised my game. I stayed focused, I found my serve when it was important.”

Coco Gauff is living up to her career-best ranking at the French Open.

Ranked 25th at age 17, Gauff advanced to the third round by beating Wang Qiang 6-3, 7-6 (1). Gauff earned her first clay-court final when she beat Wang in Parma, Italy, less than two weeks ago.

Gauff has 23 match victories this season and only three women have more. She won the girls’ singles title at Roland Garros three years ago.

Roger Federer is letting his annoyance show at the French Open.

Federer argued at length with the chair umpire after receiving a time violation for slow play in his second-round match against Marin Cilic.

The 20-time Grand Slam champion received the warning for slow play at 40-40 in the fifth game of the second set, with Cilic leading 3-1 after losing the first set.

A frustrated Federer stood and argued with umpire Emmanuel Joseph for more than two minutes, saying he should have talked to him before giving him a formal warning.

Meanwhile, Cilic jogged up and down the baseline, before Federer asked Cilic for his opinion.

“Marin, am I playing too slow?” he asked.

A surprised Cilic moved forward toward the net and suggested to Federer that he was.

“I’m going from one corner to the next, trying to get my towel,” Federer said.

After losing the game he continued to argue with Emmanuel in French and suggested that Cilic wasn’t perfect, either.

Gael Monfils has lost in the second round of the French Open and left the host country’s men on the verge of their worst collective result at Roland Garros.

Richard Gasquet needs a maiden victory over 13-time champion Rafael Nadal or there will be no Frenchmen in the third round of their home Grand Slam for the first time in the Open era. Gasquet has a 0-16 record against Nadal.

Former U.S. Open champion Sloane Stephens beat a top-10 player for the first time in 2 1/2 years to reach the third round at the French Open.

The steady Stephens had 22 winners and only 17 unforced errors. She broke six times.

Stephens is ranked 59th and is out of the top 50 for the first time since 2017 but always dangerous on clay. She was the runner-up at the 2018 French Open and made the quarterfinals in 2019.

Matteo Berrettini has matched his best result at the French Open by reaching the third round.

Top-ranked Ash Barty has retired from her second-round match at the French Open.

The 2019 champion trailed 6-1, 2-2 in the second round when she signaled she was not able to keep playing against Polish opponent Magda Linette on Court Philippe Chatrier.

Barty has been dealing with a left hip problem and struggled through a 6-4, 3-6, 6-2 win over 70th-ranked Bernarda Pera in the first round.

Barty decided not to try to defend her title last year because of the coronavirus pandemic.

Barty played 13 matches on clay in the buildup to the French Open and won 11. But she was forced to retire in the quarterfinals in Rome in May because of an injury to her right arm.

Last year’s runner-up Sofia Kenin advanced to the third round at Roland Garros with a 7-5, 6-3 win over Hailey Baptiste in a battle of Americans.

Kenin has had a tough start to the season. The 2020 Australian Open champion underwent an emergency appendectomy in Melbourne in February and her record was 7-8 entering the clay-court Grand Slam.

Svitolina played brilliantly in the opening set by combining deep shots from the baseline with clever play at the net and dropping only five points on her service games. She recovered from a blip early in the second set to win the last five games.

The 2019 champion was stretched to three sets in her opening match when she needed a medical timeout because of acute pain in her left hip.

Rafael Nadal celebrates his 35th birthday by facing Richard Gasquet. The 13-time champion is 16-0 against the Frenchman.