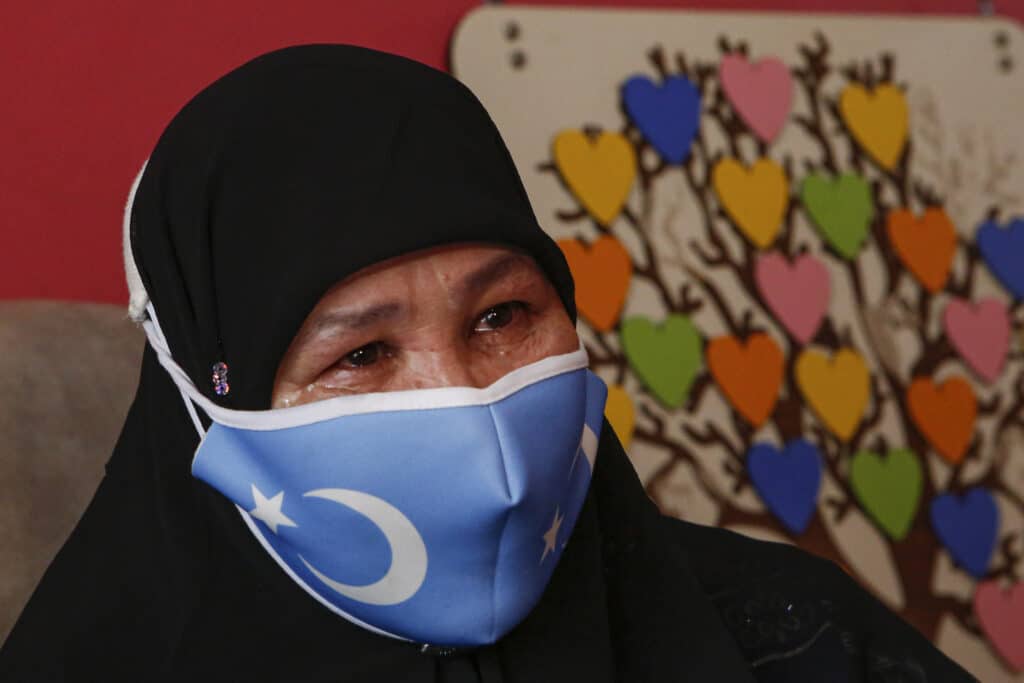 Information is coming out about atrocities in the Chinese regime of Xinjiang. Three Uyghurs who escaped will be testifying to an independent U.K. tribunal about torture and forced abortions. The Associated Press has the story:

ISTANBUL (AP) — Three Uyghurs who fled from China to Turkey have described forced abortions and torture by Chinese authorities in China’s far western Xinjiang region, ahead of giving testimony to a people’s tribunal in London that is investigating if Beijing’s actions against ethnic Uyghurs amount to genocide.

The three witnesses include a woman who said she was forced into an abortion at 6 1/2 months pregnant, a former doctor who spoke of draconian birth control policies, and a former detainee who alleged he was “tortured day and night” by Chinese soldiers while he was imprisoned in the remote border region.

They spoke to The Associated Press of their experiences before testifying by video link to the independent U.K. tribunal, which is expected to draw dozens of witnesses when it opens four days of hearings on Friday.

The tribunal, which does not have U.K. government backing, will be chaired by prominent human rights lawyer Geoffrey Nice, who led the prosecution of ex-Serbian President Slobodan Milosevic and worked with the International Criminal Court.

While the tribunal’s judgment is not binding on any government, organizers hope the process of publicly laying out evidence will compel international action to tackle growing concerns about alleged abuses in Xinjiang against the Uyghurs, a largely Muslim ethnic group.

One witness, mother-of-four Bumeryem Rozi, said authorities in Xinjiang rounded her up along with other pregnant women to abort her fifth child in 2007. She said she complied because she feared that otherwise authorities would have confiscated her home and belongings and endangered her family.

“I was 6 1/2 months pregnant … The police came, one Uyghur and two Chinese. They put me and eight other pregnant women in cars and took us to the hospital,” Rozi, 55, told the AP from her home in Istanbul.

“They first gave me a pill and said to take it. So I did. I didn’t know what it was,” she continued. “Half an hour later, they put a needle in my belly. And sometime after that I lost my child.”

Semsinur Gafur, a former obstetrician-gynecologist who worked in a village hospital in Xinjiang in the 1990s, said she and other female clinicians used to go from house to house with a mobile ultrasound machine to check if anyone was pregnant.

“If a household had more births than allowed, they would raze the home … They would flatten the house, destroy it,” Gafur said. “This was my life there. It was very distressing. And because I worked in a state hospital, people didn’t trust me. The Uyghur people saw me as a Chinese traitor.”

A third Uyghur exile, Mahmut Tevekkul, said he was imprisoned and tortured in 2010 by Chinese authorities who interrogated him for information about one of his brothers. Tevekkul said the brother was wanted partly because he published a religious book in Arabic.

Tevekkul described being beaten and punched in the face during questioning.

“They put us on a tiled floor, shackled our hands and feet and tied us to a pipe, like a gas pipe. There were six soldiers guarding us. They interrogated us until the morning and then they took us to the maximum-security area of the prison,” he said.

The tribunal is the latest attempt to hold China accountable for alleged rights abuses against the Uyghurs and other predominantly Muslim and ethnic Turkic minorities.

An estimated 1 million people or more — most of them Uyghurs — have been confined in re-education camps in Xinjiang in recent years, according to researchers. Chinese authorities have been accused of imposing forced labor, systematic forced birth control and torture, and separating children from incarcerated parents.

Beijing has flatly rejected the allegations. Officials have characterized the camps, which they say are now closed, as vocational training centers to teach Chinese language, job skills and the law to support economic development and combat extremism. China saw a wave of Xinjiang-related terror attacks through 2016.

The hearings’ organizers said Chinese authorities have ignored requests to participate in the proceedings. The Chinese embassy in London did not respond to requests for comment, but officials in China have said the tribunal is set up by “anti-China forces” to spread lies.

“There is no such thing as genocide or forced labor in Xinjiang,” the region’s government spokesperson Elijan Anayat told reporters Thursday. “If the tribunal insists on going its own way, we would like to express our severe condemnation and opposition and will be forced to take countermeasures.”

In April, Britain’s parliament followed those in Belgium, the Netherlands and Canada in declaring that Beijing’s policies against the Uyghurs amounted to genocide and crimes against humanity. The U.S. government has also done the same.

But Nice, the lawyer leading the tribunal, said so far those declarations of genocide have come with limited analysis of evidence about the intentions behind the Chinese government’s policies.

“It is the mental state of those organs (of the Chinese government) that would have to be examined or established and proved if any finding of genocide is ever to be made,” Nice said. “It’s pretty obvious that purpose and intent is going to be critical.”

Nice was one of nine British citizens sanctioned by China in March for spreading “lies and disinformation” about the country. The move came after the U.K. and other Western governments took similar measures against China over its treatment of the Uyghurs.

The lawyer said he isn’t intimidated, but admitted that the sanctions have resulted in some participants withdrawing from the tribunal. Organizers also said they have been subjected to cyber targeting. They had to increase the event’s security after about 500 of the hearings’ free tickets were booked up by people with fake email addresses.

While her fellow exiles said they agreed to testify to seek justice, Rozi, the woman who reported the forced abortion, says she is motivated to speak out for a more personal reason. Her youngest son has been detained since 2015, when he was just 13, and she hopes the tribunal’s work will help lead to his freedom one day.

“I want my son to be freed as soon as possible,” she said. “I want to see him be set free.”