Giorgio Cafiero
7 posts
CEO of Gulf State Analytics, adjunct fellow at the American Security Project. Cafiero is a regular contributor to the Middle East Institute, Gulf International Forum. He has an MA in International Relations from the University of San Diego. 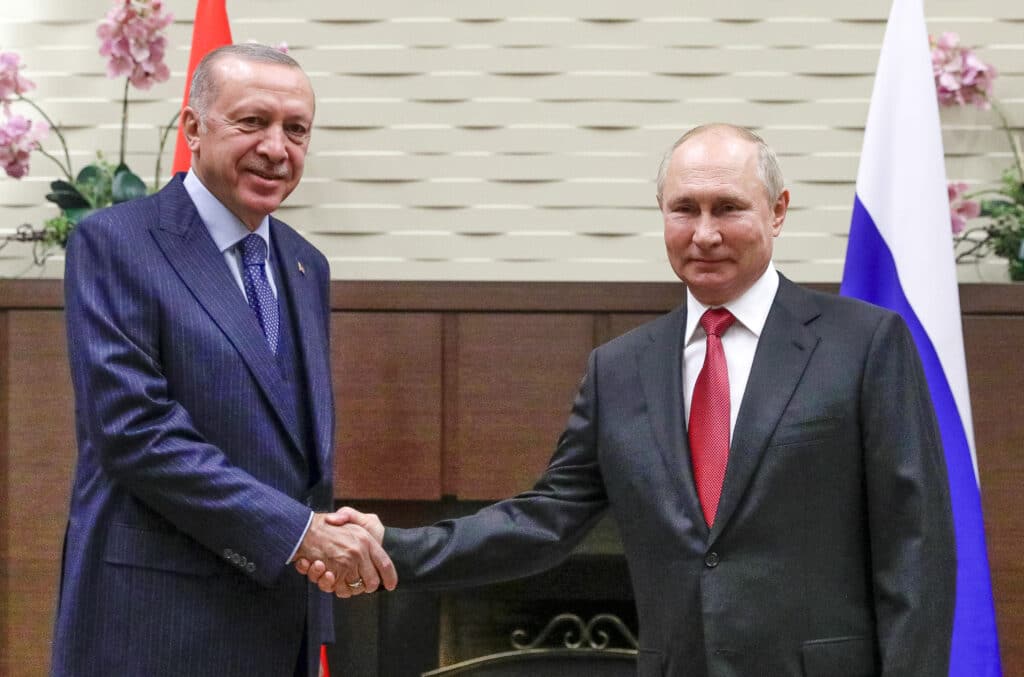 On September 29, Erdogan met Russian President Vladimir Putin in Sochi for discussions about arms sales, trade, and nuclear cooperation. Despite all the pressure from Washington, Erdogan has stood firmly behind Ankara’s decision to purchase the Russian-made S400 system and buy a second batch. When Erdogan spoke about his country’s defense relations with Moscow, he declared that “there is no path back in this sphere.” The Biden administration must make difficult decisions in relation to growing Turkish-Russian defense cooperation—a reality that the Obama and Trump administrations also had difficulty addressing.

Turkey and Russia have complicated relations. On one hand, there is much tension between the two. Ankara and Moscow support opposing sides in various conflicts from Syria to Ukraine and Libya to the Southern Caucasus. On the other hand, the Turks and Russians cooperate in various sectors such as defense, energy, tourism, and investment.

Geopolitical balance is the name of the game for Turkey. The ‘Russia card’ gives Erdogan’s government greater leverage vis-à-vis Washington. By letting US officials know that Turkey has other options in an increasingly multipolar world, Ankara wants deeper relations with ‘alternative powers’, and less dependency on Washington. This leverage has become increasingly important to Turkey against the backdrop of various issues causing friction in the Ankara-Washington alliance. Such sensitive issues have included US support for the YPG in Syria, the FETÖ leader’s presence in Pennsylvania, the Mehmet Hakan Atilla file, Varosha, Biden’s Armenian genocide statement, and America’s alleged role in the failed Turkish coup plot of 2016.

The point behind Erdogan’s strategies for balancing Washington and Moscow is “not to be pro-US or pro-Russia,” explained Eldar Mamedov, a foreign policy adviser to the European Parliament’s Socialists and Democrats group. “It’s about making Turkey the joker in its geopolitical environment. Sometimes this requires working with US, sometimes with Russia, but the aim is always to maximize Turkey’s power.”

The Biden administration, like its predecessors, views Turkey’s growing defense relationship with Russia with alarm. Washington’s view is that Turkey going to Russia for S400 deals is unacceptable. In 2019, the US blocked the sale of 100 Lockheed Martin-made F-35 fighter jets to Turkey because of this issue. Turkey’s response has been that Ankara had no choice but to turn to the Kremlin for the S400 after the Obama White House refused to sell the Turks the Patriot missile defense system. Ironically, President Donald Trump voiced his agreement with that position, which enabled him to do something he always loved doing as president (blame Obama), but in December 2020 the US imposed CAATSA sanctions on Turkey as one of the outgoing administration’s final moves in the international arena.

As reported earlier this month, Turkey has recently requested 40 US-made F-16 fighter jets plus 80 modernization kits for the country’s existing warplanes. This surprise comes at a time in which the Turks seek to modernize their Air Force in the aftermath of the F-35 purchase falling apart. Turkish officials have claimed that the Biden administration has stated its inclination to support the USD 6 billion sale of F-16 fighter jets to Ankara. Regardless, Congress’s approval is necessary for the deal to move forward, so it is unlikely. Lawmakers who are angry about the S400 issue and some other points of friction in the US-Turkey alliance will call for denying this request to Ankara. Many voices in Washington will see this as an opportunity to send Turkey another loud and clear message about its growing defense cooperation with Russia.

Might Ankara also be concerned about new US-imposed sanctions from the Biden administration (which has so far maintained the CAATSA sanctions on Turkey)? Maybe. But Turkish officials might also be betting on their country gaining greater strategic value to Washington because of recent developments in Afghanistan and Ankara’s potential role in that war-torn country. This could result in the Biden administration working to avoid antagonizing the Turks, whom along with the Qataris the White House will likely want to be able to work with on Afghanistan-related issues moving forward. Though time will tell how much Turkey can, in practice, help Washington and other western capitals vis-à-vis post-US Afghanistan.

At the same time, Biden’s administration might worry that denying this F-16 request could result in Ankara going to Russia or China for fighter jets. Turkey possibly made this request for F-16s while knowing that Washington would say no just to set the stage for turning to Moscow or Beijing. Such an outcome could only further undermine strategic cooperation between the US and its most important ally in the Islamic world. Some experts have warned that this scenario can’t be ruled out even if it would require Turkey to go through many difficult logistical hurdles and accept serious geopolitical risks.

“As someone who closely followed Turkey’s S-400 acquisition, this author finds it hard to rule out such a scenario, despite all arguments that Turkey’s use of Russian warplanes is technically inviable,” wrote Dr. Metin Gurcan, an Istanbul-based security analyst. “Sources in Ankara [said] that the Turkish government sees the request as one last test of confidence with the Biden administration, stressing that the administration could convince Congress to approve the sale if it truly cares to keep Turkey from gravitating to Russia. The request is seen as a sort of a junction, with Ankara bracing for a new strategy, depending on Washington’s response.”

Previous Article
Trial about to begin in death of Ahmaud Arbery
Next Article
The MoRa Plan: A creative solution to Global Refugee Crisis