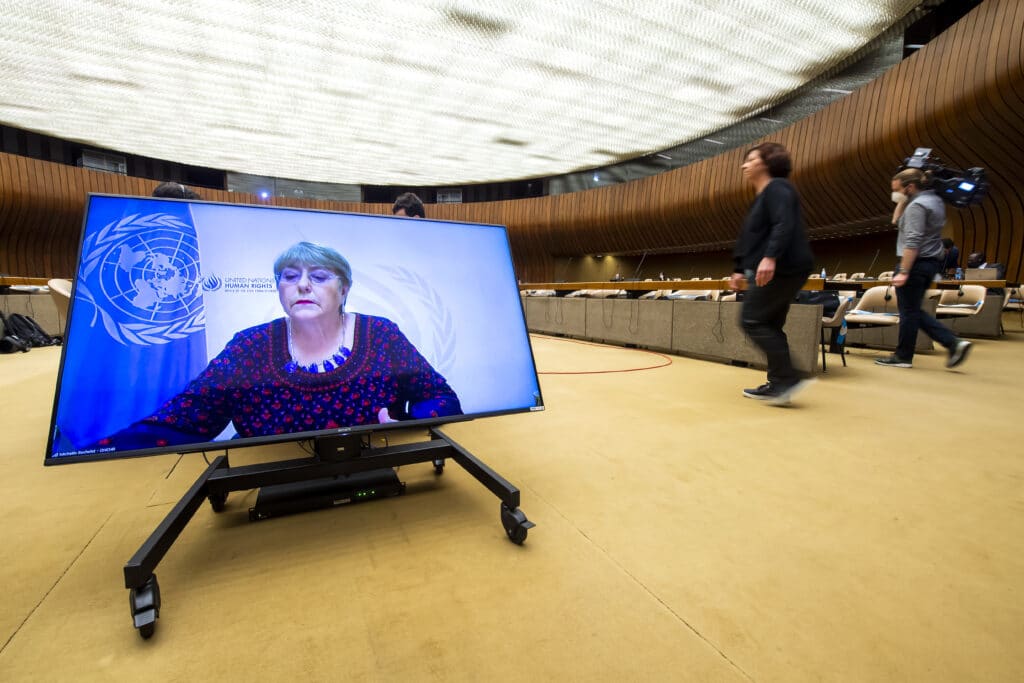 Israel may have committed war crimes against Palestinians in Gaza, UN investigating

GENEVA (AP) — The top U.N. human rights body on Thursday passed a resolution aimed to intensify scrutiny of Israel’s treatment of Palestinians, after the U.N. rights chief said Israeli forces may have committed war crimes and faulted the militant group Hamas for violations of international law in their 11-day war this month.

The 24-9 vote, with 14 abstentions, capped a special Human Rights Council session on the rights situation faced by Palestinians. The session and the resolution were arranged by Organization of Islamic Cooperation countries, which have strongly supported Palestinians in their struggles with Israel.

The resolution, which was denounced by Israel, calls for the creation of a permanent “Commission of Inquiry” — the most potent tool at the council’s disposal — to monitor and report on rights violations in Israel, Gaza and the West Bank. It would be the first such COI with an “ongoing” mandate.

The commission is also to investigate “all underlying root causes of recurrent tensions, instability and protraction of conflict” including discrimination and repression, according to the text. Amid signs that the resolution would pass, its authors added more teeth to its language with a late revision on Wednesday.

The revised text calls on states to refrain from “transferring arms” — the recipients were not specified — when they asses “a clear risk” that such weapons might be used to commit serious violations of human rights or humanitarian law. That appeared aimed to countries that ship weapons to Israel.

The Palestinian Authority welcomed the resolution, saying it amounted to “international recognition of Israel’s systemic oppression and discrimination against the Palestinian people.”

“This reality of apartheid and impunity can no longer be ignored,” it added.

China and Russia were among those voting in favor. Several Western and African countries voted no.

Russian envoy Olga Vorontsova said the resolution “has the goal of establishing all of the facts behind all alleged violations in the latest period.” Venezuelan Ambassador Hector Constant Rosales said a resolution “condemning the genocidal action of the Israeli government” was urgently needed.

Israel had called on “friendly” countries to oppose the meeting, and the United States — while not a member of the 47-member state body — did not take part, even in its status as an observer state. An array of countries denounced the latest violence and urged efforts to address the roots of the Mideast conflict.

After the vote, the U.S. mission in Geneva said the United States “deeply regrets” the move to create an “open-ended” Commission of Inquiry. It said some unspecified member states of the council “have chosen to engage in a distraction that adds nothing to ongoing diplomatic and humanitarian efforts” in the region.

U.N. High Commissioner for Human Rights Michelle Bachelet, who spoke early in the session, called on Israel to allow an independent probe of military actions in the latest spasm of deadly violence, which left devastation and death in the Gaza Strip before a cease-fire last week.

The 11-day war killed at least 248 in Gaza, including 66 children and 39 women. In Israel, 12 people also died, including two children.

“Air strikes in such densely populated areas resulted in a high level of civilian fatalities and injuries, as well as the widespread destruction of civilian infrastructure,” Bachelet said.

“Such attacks may constitute war crimes,” she added, if deemed to be indiscriminate and disproportionate in their impact on civilians. Bachelet urged Israel to ensure accountability, as required under international law in such cases, including through “impartial, independent investigations” of actions in the escalation.

Bachelet said Hamas’ indiscriminate rocket fire during the conflict was also a clear violation of the rules of war, and she derided the group’s tactics that included locating military assets in densely populated civilian areas, and firing rockets from them.

“These rockets are indiscriminate and fail to distinguish between military and civilian objects, and their use, thereby, constitutes a clear violation of international humanitarian law,” Bachelet said. “However, the actions of one party do not absolve the other from its obligations under international law.”

She cautioned violence could erupt again unless the “root causes” are addressed.

The day-long virtual debate involved personal accounts from Palestinians — like one of a young woman journalist from the Sheikh Jarrah neighborhood in east Jerusalem, an early flashpoint that triggered the violence — as well as the statements from the council’s 47 member states and also observer states.

Israel — backed at times by the United States — has long accused the council of anti-Israel bias and has generally refused to cooperate with its investigators.

Israeli Ambassador Meirav Eilon Shahar said Hamas — designated a terrorist organization by the U.S. and its allies — had fired 4,400 rockets at Israeli civilians from “from Palestinian homes, hospitals, and schools. Each one of these rockets constitutes a war crime.”

“What would you do if rockets were fired at Dublin, Paris, or Madrid,” she asked.

Riad al-Maliki, the Palestinian foreign minister, sought to highlight years of suffering by Palestinians in the lands controlled or occupied by Israel.

“The Israeli war machinery and terrorism of its settlers continue to target our children who face murder, arrest and displacement, deprived of a future in which they can live in peace and security,” al-Maliki said.