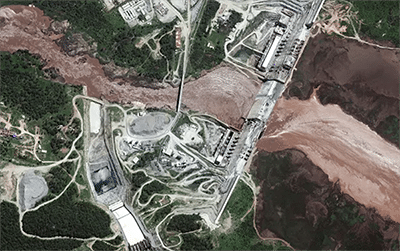 CAIRO (AP) — A new round of talks between three African nations began Saturday, officials said, aimed at resolving a yearslong dispute over a giant dam Ethiopia is building on the Nile River’s main tributary.

The three-day talks are taking place in Kinshasa, the capital of the Democratic Republic of Congo, the current chair of the African Union. The AU is mediating the negotiations between Egypt, Ethiopia and Sudan over the Grand Ethiopian Renaissance Dam.

Egypt’s Foreign Ministry said in a statement that Cairo wants the negotiations to eventually lead to a legally binding agreement over the operation and filling of the dam’s massive reservoir.

Foreign and irrigation ministers of the three nations were attending the talks, along with experts from the African Union, according to Ethiopia’s Irrigation Minister Seleshi Bekele.

A Sudanese diplomat said experts from the three countries and the African Union met Saturday, ahead of ministers who would meet Sunday and Monday. He spoke on condition of anonymity because he was not allowed to brief media.

Sudan said it would take part in the Kinshasa round with an aim of agreeing on a “negotiating approach” to ensure the talks would be constructive. That would include an Egyptian-backed Sudanese proposal to include the U.S., European Union and United Nations as mediators along with the AU, the Foreign Ministry said in a statement.

Ethiopia has rejected the proposal, saying it “believes in resolving African problems by Africans.”

The dispute centers on the speed at which a planned reservoir is filled behind the dam, the method of its annual replenishment, and how much water Ethiopia will release downstream if a multi-year drought occurs. Another point of difference is how the three countries would settle any future disputes.

Egypt and Sudan want a legally binding agreement on the dam’s filling and operation, while Ethiopia insists on guidelines.

The talks in Kinshasa come a few days after Egypt’s President Abdel Fattah el-Sissi said his country’s share of Nile River waters were “untouchable” — a stark warning apparently to Ethiopia, which is preparing for another stage of the dam’s filling later this year.

El-Sissi warned Tuesday of “instability that no one can imagine” in the region if the dam’s is filled and operated without a legally binding agreement.

Bekele, the Ethiopian minister, said his country “as always is determined for principled, equitable and reasonable utilization without causing significant harm,” according to Ethiopia’s official news agency.

Egypt is a mostly desert country that depends on the Nile for almost all of its water needs. It fears that a quick fill would drastically reduce the Nile’s flow, with potentially severe effects on its agriculture and other sectors.

Ethiopia says the $5 billion dam is essential, arguing that the vast majority of its population lacks electricity. The dam will generate over 6,400 megawatts of electricity, a massive boost to the country’s current production of 4,000 megawatts.

Sudan wants Ethiopia to coordinate and share data on the dam’s operation to avoid flooding and protect its own power-generating dams on the Blue Nile, the main tributary of the Nile River. The Blue Nile meets with the White Nile in central Sudan. From there the Nile winds northward through Egypt and flows into the Mediterranean Sea.

Previous Article
US, Japan, South Korea consultations on North Korea approach
Next Article
French sports ministry: Most of the sexual victims were under 15