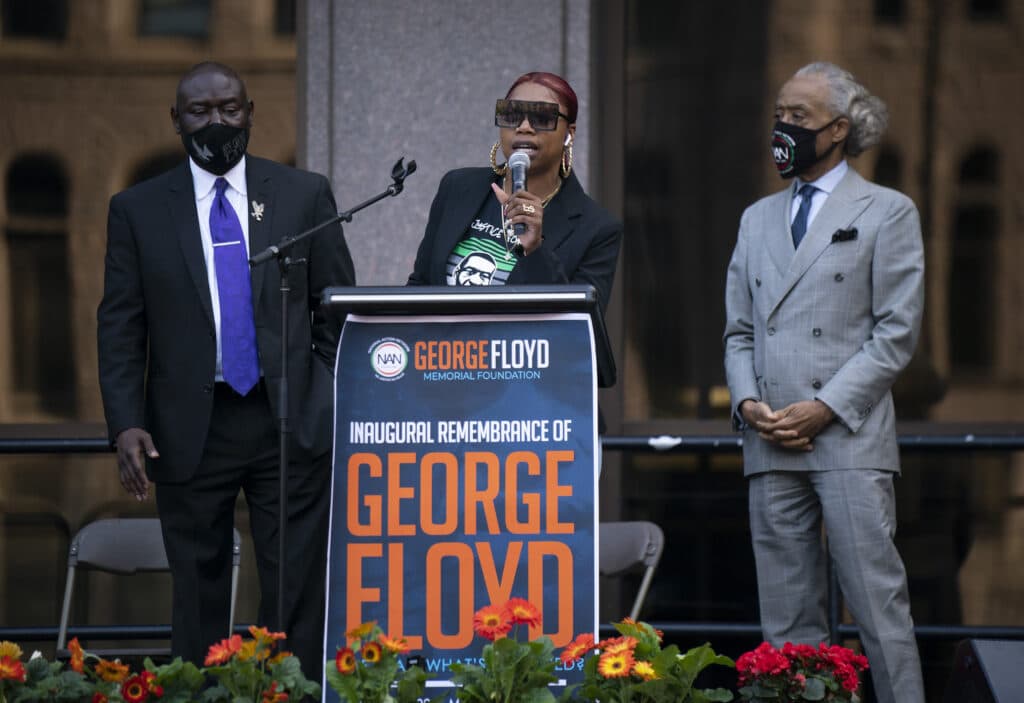 Hundreds of people attended a rally and march in downtown Minneapolis organized by the family of George Floyd on the one-year anniversary of his death. Speakers at the Sunday event included Floyd family attorney Ben Crump and the Rev. Al Sharpton. The Associated Press has the story:

MINNEAPOLIS (AP) — Members of George Floyd’s family, and others who lost loved ones to police encounters, joined activists and citizens in Minneapolis for a march that was one of several events planned nationwide to mark the one-year anniversary of Floyd’s death.

Hundreds of people gathered for the rally Sunday in front of the courthouse in downtown Minneapolis where former police officer Derek Chauvin was convicted last month in Floyd’s death. Many carried signs with pictures of Floyd, Philando Castile and other Black men killed by police.

Amid chants of “no justice, no peace!” and “Say his name,” Gov. Tim Walz, Minneapolis Mayor Jacob Frey and St. Paul Mayor Melvin Carter watched alongside a dozen of Floyd’s family members as speakers called for justice for families of Black men slain by police.

“It has been a long year. It has been a painful year,” Floyd’s sister Bridgett told the crowd on Sunday. “It has been very frustrating for me and my family for our lives to change in the blink of an eye — I still don’t know why.”

Tuesday will mark one year since Floyd, who was Black, died after former Minneapolis police officer Derek Chauvin held his knee on Floyd’s neck as he pleaded for air. Floyd’s death sparked worldwide protests and calls for change in policing in the U.S. Chauvin, who is white, was convicted of murder and manslaughter in his death.

Calls to pass the George Floyd Justice in Policing Act

Speakers at the event included several local activists, Floyd family attorney Ben Crump, and the Rev. Al Sharpton, who called on the U.S. Senate to pass the George Floyd Justice in Policing Act. The legislation, which would bring about the most significant changes to policing on the federal level, would ban the use of chokeholds and establish a national database of police misconduct.

“We want something coming out of Washington. We want something that will change federal law,” Sharpton said. “There’s been an adjournment on justice for too long. It’s time for them to vote and make this the law.”

The George Floyd Memorial Foundation, a nonprofit based in Fayetteville, North Carolina, where Floyd was born, was hosting a series of events in Minneapolis to honor Floyd on the anniversary.

The nonprofit was launched in Floyd’s honor by his siblings in September 2020 to help combat racial inequities in Black and brown communities.

Other events in Minneapolis ahead of the anniversary include a virtual “day of action” that encourages people to organize remotely and two panels with the families and other activists on Monday, followed by a community festival and candlelight vigil on Tuesday.

In New York on Sunday, Floyd’s brother, Terrence, attended a gathering in Brooklyn in his brother’s memory organized by Sharpton. Terrence Floyd told supporters not to forget his brother or victims of racist violence.

“If you keep my brother’s name ringing, you’re going to keep everybody else’s name ringing,” he said. “Breonna Taylor, Sean Bell, Ahmaud Arbery, you could go through the whole list. There’s a lot of them.”

Executive director Jacari Harris said the group has received donations from the Minneapolis Foundation, Black Lives Matter Global Network Foundation and athletic shoe and apparel retailer Finish Line, among others. Despite large grants from corporations and other organizations, Harris the average donation to the nonprofit was $47.

Harris said the group has also funded an initiative in Fayetteville to help reduce homelessness, a scholarship program for law school students and an internship program at Texas A&M University, where Floyd went to school.

Previous Article
Earmarks are back. Who benefits?
Next Article
Sánchez: Spain is Morocco’s Ally, and will defend its interests