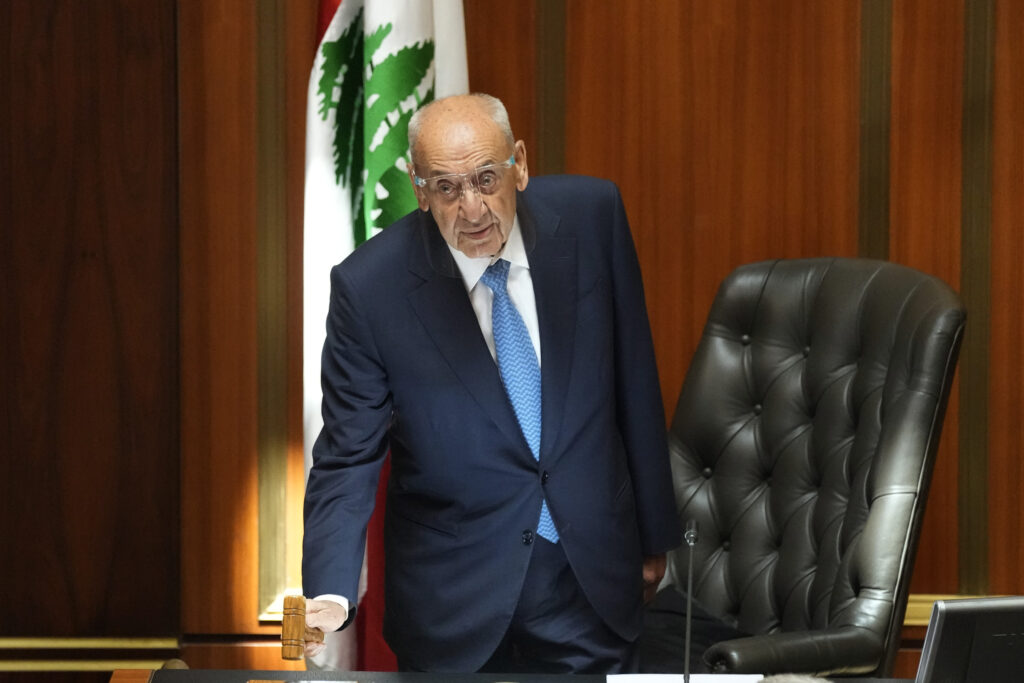 It’s been a long run for Lebanon’s longtime parliament speaker Nabih Berri. Despite a crumbling economy, legislators chose the 84-year-old former warlord for the seventh time, although it was with the minimal amount of votes needed. The Associated Press has the story:

BEIRUT (AP) — Lebanon’s longtime parliament speaker who has held the post for 30 years, was reelected Tuesday for a seventh four-year term with the minimum number of votes needed and despite multiple crises plaguing the nation.

Still, the slim majority in favor of Nabih Berri was a reflection of a significant shift in public opinion in the crumbling economy on the verge of bankruptcy. His reelection was practically guaranteed — even though more than a dozen new lawmakers won seats running on a reform platform.

The new legislature is being ushered in as Lebanon remains in the grip of the worst economic and financial crisis in its modern history, rooted in decades of corruption and mismanagement by the ruling class, which has been running the country since the end of the 1975-90 civil war.

To most Lebanese, Berri, an 84-year-old former warlord, is a symbol of this entrenched sectarian-based political system and ruling class, which continues to hold despite rising discontent and the newly elected, reform-minded lawmakers.

As leader of the Shiite Amal movement, which is closely allied with the militant Hezbollah group, Berri is virtually untouchable – always running uncontested. The two parties hold all 27 seats allotted to Shiites in parliament under Lebanon’s power-sharing system.

In a reflection of the divisions and polarization in the new assembly, Tuesday’s session was characterized by tense back-and-forth shouting and arguing between Berri and indignant lawmakers.

The May 15 election was the first since Lebanon’s economic crisis began in late 2019 with nationwide mass protests against the political class. Since then, the Lebanese currency has collapsed, banks have clamped down on depositors’ money and the country’s foreign currency reserves have dwindled to barely enough to purchase essentials such as fuel and medicine amid severe shortages.

The new parliament is deeply divided with no coalition holding a majority. Hezbollah and its allies lost the dominance they had held since 2018, and now hold 61 seats — four short of an absolute majority in the 128-seat chamber.

Berri was elected with 65 votes in favor — the lowest number he has ever received over the past three decades. There were 23 blank ballots and 40 were annulled. In 2000, Berri received 124 votes in the assembly and in 2018, he got 98.

“My hand is extended to everyone who wants to cooperate with good faith to save Lebanon,” Berri said as celebratory gunfire by his supporters rang out across parts of Beirut. He had issued a statement on Monday calling on his supporters to abstain from the traditional firing in the air.

“Mr. Speaker, shooting is ongoing outside,” quipped legislator Sammy Gemayel, interrupting Berri as he spoke. Berri responded: “I issued a statement, what can I do?

The 13 independent candidates, drawn from the 2019 protest movement, and some of the Christian parties in parliament had said they would not vote for Berri, leaving him with a much slimmer margin of support, mainly from Shiite parties belonging to the Hezbollah-led coalition. The powerful Berri was the only candidate for the post of speaker, which under Lebanon’s power-sharing agreement is held by a Shiite.

Ahead of the session, some of the independents and new legislators gathered outside Beirut’s port — the scene of a massive explosion in August 2020 that killed more than 200 people — and met with families of the victims who perished in the blast. After the meeting, they walked to Parliament, surrounded by hundreds of supporters chanting “revolution.”

Independent legislator Mark Daou, a newcomer, entered the parliament building carrying a large poster with photographs of those killed in the blast. Two of the politicians charged in connection with the blast are members of Berri’s parliamentary bloc. They have legally challenged the investigative judge’s order and were present in the assembly Tuesday after being reelected on May 15.

“This is a moment of change in Lebanon. There is a new political group that represents a big part of Lebanese society that has taken a sizable bloc in parliament and will change the dynamics that we’ve had and that destroyed the country since the Civil War,” he told The Associated Press ahead of the session.

The investigation into the port explosion, when hundreds of tons of improperly stored ammonium nitrate detonated, has been stalled for months amid legal challenges by officials charged by the investigative judge.

“Beirut has the right to know who killed her,” said independent legislator Yassin Yassin, in a reference to the bungled probe.

Reflecting the divisions in parliament, many of the annulled ballots Tuesday had slogans written on them such as “justice for the victims of the port blast” and “justice for Lokman Slim,” an anti-Hezbollah Shiite political activist who was found shot in his car last year.

The presence of the independent lawmakers in the legislature is a major achievement — they went into the vote fragmented and faced intimidation and threats by entrenched mainstream parties.

It sent a strong message to politicians who have for decades held on to their seats and continue to do so despite the economic meltdown, which has impoverished Lebanon and triggered the biggest wave of emigration since the 1975-90 civil war.

By BASSEM MROUE and ZEINA KARAM