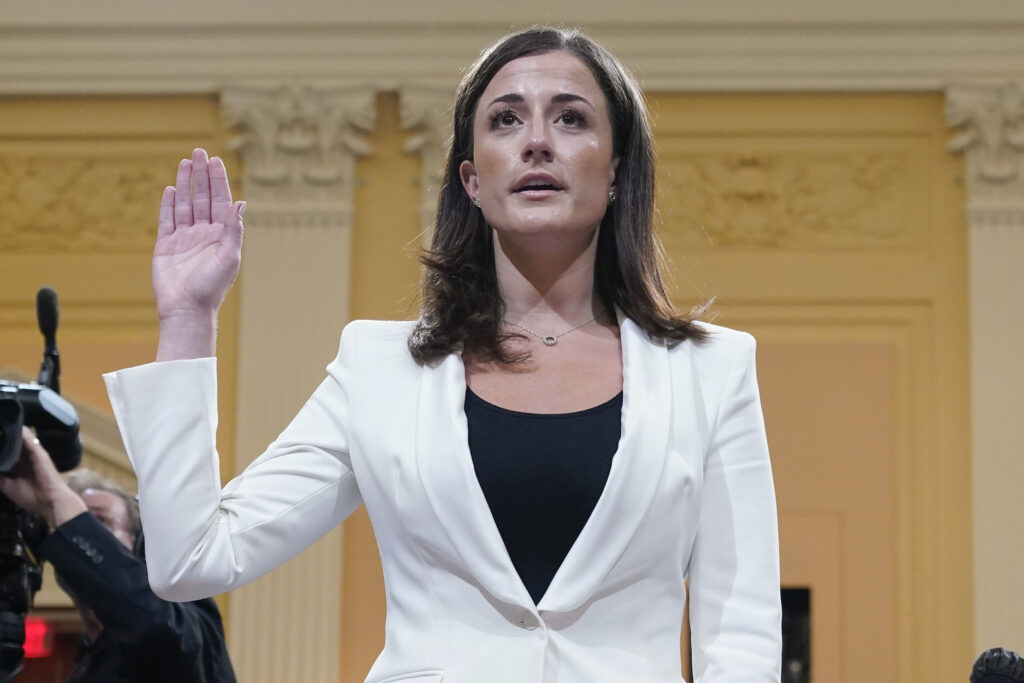 Democrats are thrilled that a former aide to Donald Trump’s chief of staff Mark Meadows is testifying today to their Jan. 6 House committee about Trump’s behavior around Jan. 6. Cassidy Hutchinson was a little known young staffer at that time, but now she has been thrust into the national spotlight for criticizing Trump. The Associated Press has the story:

Trump dismisses Cassidy Hutchinson as ‘a total phony’ and ‘leaker’

WASHINGTON (AP) — Just two years out of college, Cassidy Hutchinson said she watched as a valet mopped up the president’s lunch after he had smashed his plate against a wall. Donald Trump was in a rage because his attorney general had refuted his claims that the election he lost had been stolen.

Weeks later, as she watched Trump resist entreaties to try to stop the rioters, the young aide who once said she went into public service to “maintain American prosperity and excellence” described her own disgust at the president.

“We were watching the Capitol building get defaced over a lie,” Hutchinson said

After months of testimony from a former attorney general and other powerful officials including Trump’s daughter and son-in-law, it was a 25-year-old staffer who perhaps put Trump’s conduct into its sharpest relief. Speaking in an even, measured tone, Hutchinson made several shocking revelations about Trump and Meadows in nationally televised testimony before a House committee investigating the Jan. 6, 2021, insurrection.

An obscure aide prior to Tuesday’s hearing, Hutchinson showed detailed knowledge of the inner workings of the Trump White House, including in the critical days that Trump and his advisers plotted to reverse President Joe Biden’s election victory.

There was no widespread election fraud. Trump lost more than 60 court cases attempting to prove wrongdoing, and even his own attorney general, William Barr, said his claims were meritless. Barr’s statements made to The Associated Press prompted Trump smashing his lunch against the wall, Hutchinson testified.

She showed her familiarity with key Trump figures, referring at times to Meadows, security official Tony Ornato, and national security adviser Robert O’Brien by their first names. Meadows, in turn, called her “Cass,” in her retelling of one story.

Although the White House is perhaps the world’s most prestigious office building, much of the staff is young, sometimes even fresh out of college like Hutchinson. They often previously worked on the president’s campaign or the national party, and they’re distinguished by their ambition and willingness to work long hours for little pay.

They’re also critical to any administration’s machinery. They help with the logistics of media coverage, prepare for public events and answer the phones. Because they’re often within earshot as the country’s most powerful people gossip and plan, discretion is expected.

Young aides often go on to bigger government roles or prestigious positions in business or the media. Some run for office themselves. But Trump’s White House turned many aides into government witnesses.

The Justice Department and Congress probed allegations of Russian influence on his first presidential campaign, his efforts to pressure Ukraine’s president to produce derogatory information about Biden and his son Hunter, and the insurrection.

Meadows has refused to testify as have some others close to Trump. Hutchinson described Meadows as detached and frequently scrolling his cellphone at key moments. Meadows didn’t immediately look up from his phone when Ornato, a Secret Service official detailed to the White House, warned him about weapons in the crowd outside the White House on the morning of Jan. 6, where Trump’s supporters were waiting to hear from him. Many in the crowd had guns and other weapons, including spears attached to the end of flagpoles, Hutchinson recalled.

She said she was close enough to Trump at one point to hear him demand that attendees not be screened so that they could fill the crowd, saying, “I don’t effing care that they have weapons. They’re not here to hurt me.”

And she alleged Trump became so irate at being driven back to the White House after his speech — when he exhorted rallygoers to “fight like hell” — rather than the Capitol that he tried to grab the steering wheel of the presidential limousine away from a Secret Service agent who was driving.

“I’m the effing president,” Hutchinson said she was told Trump had said.

Trump, writing on his personal social media network, dismissed Hutchinson as “a total phony and ‘leaker.'”

“Never complained about the crowd, it was massive,” he said. “I didn’t want or request that we make room for people with guns to watch my speech. Who would ever want that? Not me!”

The events in her testimony — explained in new and vivid detail for the first time publicly — are of potentially vital interest to both the committee and the Justice Department. Federal agents have seized the phones of Jeffrey Clark and John Eastman, two lawyers who pushed false claims of election fraud and the discredited theory that Biden’s electors could be replaced. Republicans in at least five states have also been served with subpoenas or warrants.

There was relatively little known about Hutchinson prior to her public testimony. In a 2018 profile published by her undergraduate alma mater, Christopher Newport University in Newport News, Virginia, Hutchinson recalled being “brought to tears” when she received an email telling her she’d been accepted to a White House internship program.

“As a first-generation college student, being selected to serve as an intern alongside some of the most intelligent and driven students from across the nation – many of whom attend top universities – was an honor and a tremendous growing experience,” she is quoted as saying.

She says in the article that she attended numerous events hosted by Trump and often watched out her window as Marine One would depart the White House’s South Lawn.

“My small contribution to the quest to maintain American prosperity and excellence is a memory I will hold as one of the honors of my life,” she said in the piece.

One sign of Hutchinson’s possible willingness to cooperate with investigations is her choice of lawyers. She recently switched from a former Trump White House official to a veteran former Justice Department official who served as chief of staff to former Attorney General Jeff Sessions and who emerged as a key witness for special counsel Robert Mueller’s investigation into ties between Russia and the 2016 Trump campaign.

Jody Hunt, the new lawyer, recounted for Mueller’s team the extent to which Trump berated Sessions over his recusal from the Russia investigation and the pressure he sought to exert on the department over the probe.

Several high-profile Republicans said Tuesday that Hutchinson was known to be close to Meadows and often accompanied him in meetings. The committee early in her testimony showed photos of her with Trump and other top officials.

Mick Mulvaney, who preceded Meadows as Trump’s chief of staff, tweeted during the hearing that “things just got a lot more interesting.” He added that “if the President knew the protesters had weapons, and still encouraged them to go to the Capitol, that is a serious problem.”

“I knew her testimony would be damning,” she tweeted. “I had no idea it’d be THIS damning. I am so grateful for her courage & integrity.”

The official account for Republicans on the House Judiciary Committee, meanwhile, dismissed her testimony as a distraction from high gas prices, adding, “no one is watching this.”

By NOMAAN MERCHANT and ERIC TUCKER